Bastille Day defeat for the French.

Conrad, Paul S and Shaun came down for our Bastille Day wargame. We were using Paul’s own set of rules “Panoply of War” for a change. Much of the pre-game shenanigans have now been dispensed with so once we were deployed it was straight into the action. The game was set in Northern Italy in 1799.  I commanded a joint Austro-Russian force while Conrad and Shaun had the French. Paul umpired. I say French but almost half of the army was drawn from the Lombard, Polish and Helvetic Legions, just to add a bit of colour to an already colourful pair of armies. Both armies were pretty evenly matched numbers wise in terms of infantry and artillery, although the Allied army had more cavalry (but only if you included the Cossacks). The one advantage the Allies had were four battalions of Russian   grenadiers, but with the Russians needing to expend two order 'chits' each time they were given an order this advantage was more than compensated for, in my opinion anyway.

The French refused their left flank completely, massing the bulk of their infantry in the centre with support from their two artillery batteries. Their cavalry was held back in reserve, which was to prove to be a mistake as the game panned out.  The Russians took the place of honour on the Allied right, with the Cossacks swanning about at the extreme of the line near the ruined aqueduct, while the Austrians held the centre with their infantry. All the Austrian cavalry was deployed on my left, which was also to prove to be an error on my part. 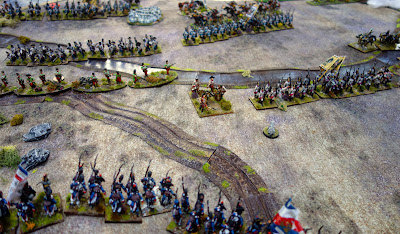 What a cracking game! Both sides made some key errors, for example the deployment of all my cavalry on one flank was unnecessary and I made heavy going of crossing the river. My artillery was also pretty ineffective and should have been pushed forward in support of the attack. The French were too keen to let the Allies come to them which meant sacrificing some of the physical objectives, but more critically they allowed themselves to be hemmed into a very small space and were unable to make much use of their cavalry or even deploy their troops effectively.

I'm getting the hang of Paul's rules and while I've enjoyed both the games I've played using them I still think they're a bit slow and too 'detailed' for my taste but I will willingly persevere as they have some excellent concepts contained within them as well.

Thanks to Paul for umpiring and the lads for being such sporting players.
By Colin Ashton - July 15, 2018