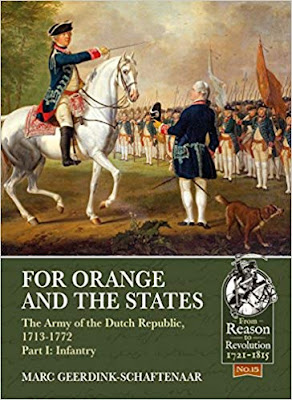 Those lovely people at Helion and Co sent me this book last week. I have more than a passing interest in the Dutch army of the 18th century, due mainly to my growing collection of armies to refight battles of the War of the 1st Coalition  in Flanders and Germany, although the Dutch army underwent significant reforms in 1772.  This must be the only or at least one of the very few English language books on the subject and very good and informative it is too.  It contains a detailed breakdown by regiment, covering colonels, campaigns and battles and uniforms where known. I especially liked the separate chapters on the Scots and Swiss. There are six pages of glorious colour paintings by Mark Allen together with copious numbers of colour and black and white illustrations throughout. I have no intention of collecting a Dutch army of this period but its a great little book nonetheless. I look forward to volume 2 appearing at the end of the year as it covers the cavalry.
By Colin Ashton - July 30, 2018