The Last Army, from Helion 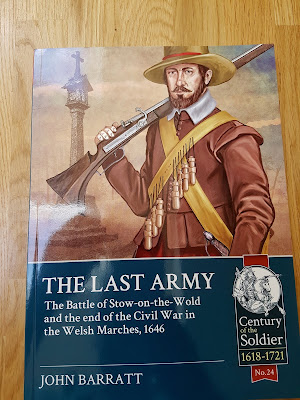 This is a subject I didn't know much about especially as my interest in the Civil Wars has dwindled over the years. In short, this book is great and certainly floats my boat in terms of a brief history of an equally brief episode at the end of the First Civil War.

The maps of the battles are pretty good, (I like the style the publisher uses), all the illustrations are very helpful and the uniform/flags plates interesting, but the campaign maps are less good as they omit any detail such as roads, rivers, etc which make them rather meaningless. Thats a small thing though really and overall I thoroughly enjoyed reading the book and broadening my understanding of this obscure part of the war. It's well researched and well referenced and the author's use of lots of contemporary writings throughout adds a great deal to help enfold the events being portrayed. I also found the 'afterward' outlining what happened to many of the key players later in their lives, several of which were to be cut short as a result of subsequent ill-fated Royalist attempts to defeat Parliament.
By Colin Ashton - July 03, 2018