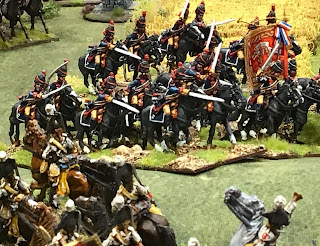 Following on from last week's game I thought I'd stage one final big FRW game (for the time being) as fellow Gentlemen of Leisure Conrad, Paul Stevenson, Jim and Nigel were coming for a game. I had planned to refight the Battle of Leignitz in 1760 but just couldn't face it. I had already refought it before a few years ago and it wasn't calling to me to have another attempt even though 15 August was the 258th anniversary of the battle.

Kaiserslautern was fought over much the same ground that saw the Prussians destroy the army of Napoleon III in 1870, e.g. Froeschweiller, Worth, so I thought a bit of subterfuge might be fun, for me at least. For an account of the real battle in 1793 see https://en.wikipedia.org/wiki/Battle_of_Kaiserslautern

I issued the players with a photo of the tabletop (above) rather than a map and explained we were fighting Prussians against the French in Alsace. I just happened to have my 19th century French kepi and Prussian pickelhaube in the conservatory where the briefing took place to 'suggest' we were going to do Franco-Prussian War. I left the French (Paul and Jim) to plan their attack and took the others into The Burrow to spring (quietly) the not that dramatic surprise that they were indeed fighting over Alsace and they were indeed Prussians with some attached Saxons and Bavarians, but they were in 1793 and not 1870. I left the Prussians to draw up their battle plan and points of entry on their map and returned to the French with their order of battle and instructions.

Both sides had orders to attack and drive the other off the table so a bit of action was promised. The French would already be deployed on the table and the Prussians would enter (hopefully) at their designated locations on turn 1 or later. My rationale was that the French might get the jump on the Prussians and bound halfway across the table before the Prussians could (a) get on the table and, (b) form up in some semblance of a battle line with their superior numbers. Well, that plan went up in smoke from turn 1!

So, and finally, a Prussian victory. Everything that could have gone badly for the French did, so none of the short term advantages I'd planned on actually came to anything. C'est la guerre I guess. The game was a bit slower than the previous ones but that is probably down to it being a multi-player game and to me making a few mistakes with the rules yet again. Anyway, I am looking forward to another game or several using GdA in a couple of weeks time. Thanks to the guys for coming to be guinea pigs with GdA. I think everyone enjoyed themselves.

Its the Other Partizan on Sunday and am looking forward to it if I'm recovered enough from the game to go.