Between Scylla and Charbidis, The Army of Elector Frederick Augustus II of Saxony 1733-63, Vol2 Infantry and Artillery 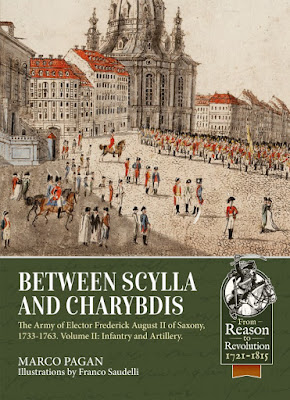 The (for me at least) long-awaited volume 2 of this study of the Saxon army of the 18th century dropped on my doormat last week. It is the latest in Helion's excellent and ever expanding 'From Reason to Revolution' series. This volume covers the infantry and artillery of the army of the Elector Friedrich August II through the same time span as the earlier volume that covered the cavalry, i.e. from the War of the Polish Succession, the wars against the Ottomans, the 1st and 2nd Silesian Wars (or the War of the Austrian Succession) to the disaster for Saxony that was the Seven Years War.  The book follows a pretty standard format that I'm very comfortable with; detailed chapters on the artillery and technical services, and each infantry regiment, covering uniforms, organisation and strengths and colours as well as brief commentaries on the army's campaigns and battles. Also included are the exotic Janissary Corps (I must do a unit) and the Saxon Kreis regiments and even invalids. The book is very well illustrated with black and white drawings and contemporary images, and as is usual with books in this series, there are eight pages of gorgeous colour plates. A great deal of information has been crammed into 140 pages and on that basis alone this is a must for anyone interested in the Saxon army of the period. Highly recommended and better even than Vol 1. I'd now better get my finger out and put the finishing touches to my remaining unfinished WAS/SYW Saxons. Thankfully there are only a couple of dozen.