Northern Tars in Southern Waters. the Russian Fleet in the Mediterranean 1806-10 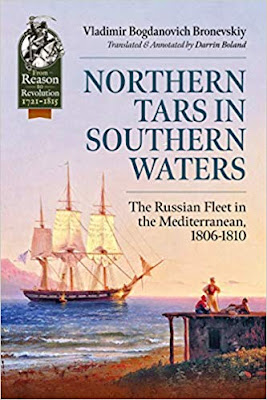 The latest from Helion & Co's 'From Reason to Revolution' series is this impressive account of the Russian Fleet's operations in the Mediterranean under Admiral Senyavin between 1806-1810. This is not a small book, running as it does to 675 pages. The original was published between 1818 and 1819 in St Petersburg, in four volumes, written by Vladimir Bronevskiy, detailing his service with Senyavin's squadron as a Midshipman, and is part naval history, part travelogue and part general history, which provide a very readable and detailed account of the campaign. Unlike several translations and/or reproductions of a serving officer's experiences of this era which are frequently, well, quite dull, this is the complete opposite. The translator Darrin Bolland has done an excellent job in presenting an unabridged, fascinating and engaging book. The involvement of the Russian navy in the Mediterranean during the Napoleonic Wars was quite extensive, more so than I thought at any rate, with bloody engagements against the French and Ottomans, particularly along the coast of Dalmatia and around the Dardenelles. Not only do we get the author's personal account of these actions, but we also get details of the broader exploits of the fleet as understood by him at that time. What I liked most about the book and what ties the journal together and makes it more than just another 'personal account' of the 'dull' variety alluded to earlier are the detailed observations on the history, cultures, geography, weather, people, indeed almost everything one might today expect from a Berlitz travel guide! The text is well referenced and annotated throughout with the original notes and corrections. The book is illustrated with the original engravings and also contains several really useful maps that help contextualise the account. This book is a must for anyone interested in the less well documented naval campaigns of the Napoleonic Wars and is certainly a little different to the usual British v French histories that are available and a most welcome addition to Helion's library. There are boatloads of scenarios just waiting to be played out on the tabletop, whether naval, land-based or both, and with the emergence of the Warlord Games Black Sails warships adds another dimension to an already fascinating period of naval warfare. Highly recommended, if only for the cultural stuff.
By Colin Ashton - November 21, 2019