This rather hot and claggy Saturday the Burrowers assembled to play what was being billed as the 'fight of the century', as the army of Paulinus Germanicus met the smaller and somewhat battered army of the (self-proclaimed) Emperor Digito, all part of the Late Roman campaign I've been running since last October.

To set the scene, last time you may recall that Digito and his Ostrogoth allies had suffered a minor'ish defeat at the hands of Johannes Rufus the Butcher (or is that the Butchest?) north east of the capital of the province Praesidium Gehenae. Digito withdrew on his capital to counter the threat from Paulinus' army that had been marching up the roads from Maluscastra. Johannes' army was slow to pursue as the surviving Ostrogoths under their leader Jazzeric were doing a good job of laying waste to the countryside around the towns of Rubrumraeda and Aquanegra. They were also trying to locate and free the elderly, infirm and child prisoners Johannes' army dragged away from the sacked town of Tabularasa, home of the previously peaceful Ostrogoths. The Emperor had sent a message for assistance to his ally Stupiddus Soddus, Comes of Asienus Superior, and this army had at once begun a forced march to rendezvous with the Emperor at Praesidium Gehenae. [Unbeknown to  everyone, the bridge linking both banks of the River Asienus south west of the capital was destroyed, and had been since about turn two of the campaign. Nobody asked, but Jazzeric's father King Miseries Psychosis had ordered several key bridges to be destroyed before his untimely demise.  Not this one though, as this was just down to poor m maintenance, bad luck and timing]. This was to have a significant impact on the battle.

Paul (Paulinus), supported by Conrad and Neil were facing Richard (Digito) with assistance from Nigel (Stuppidus Soddus in the campaign) and me. Paul's army was approx 1,400 points against Richard's 1,000, but Nigel's army of around 1,000 points was also en route to support him should he arrive in time. We used the excellent Sword and Spear rules. With the exception of eight legions and a couple of units of cavalry belonging to Richard, the figures and terrain are all mine.

Reporters were embedded within both armies so I am sure we will read more about this battle and the consequences of the outcome on the province in the pages of the Asienus Gladiator in due course, but for now I give you lots of pictures and some details on how the battle panned out for  both sides. 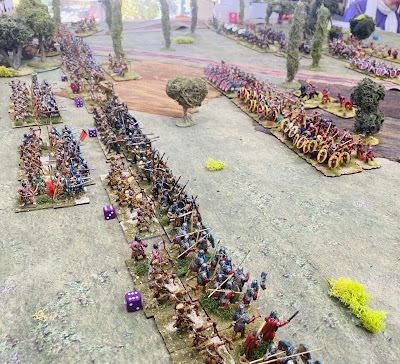 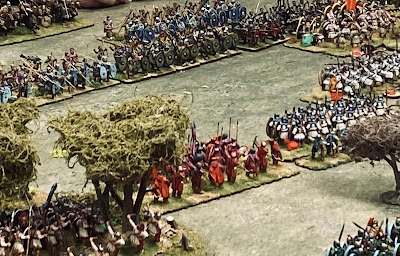 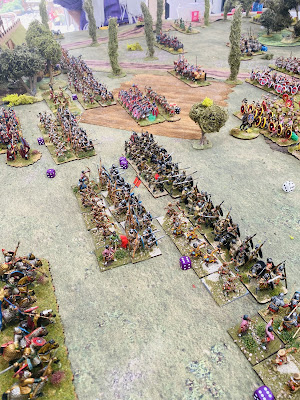 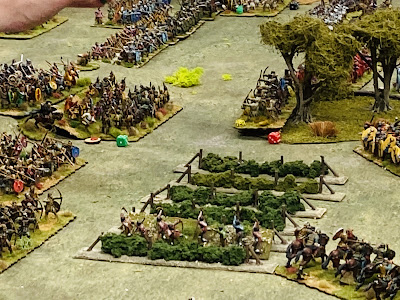 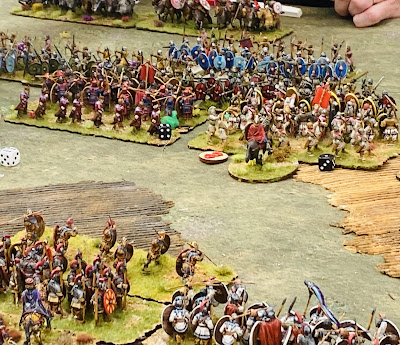 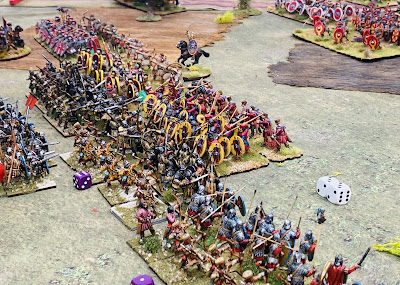 Digito's centre then very quickly collapsed and my cavalry were spent. The remains of Digito's army either fled, were cut down or changed sides. This was a significant victory for Paulinus and his allies and with Digito now out of the frame it would appear that for the time being at least status quo has returned to the province. [Ok, there are Huns and Visigoths running riot in the west of the province but they would be unlikely to make any further progress now that the Romans had stopped fighting each other, for the time being]. Nigel's army had been unable to join Richard. Had he done so then I suspect the outcome would have been very different. As it is, Nigel and his men pulled back to their base, denying any intention of joining in the battle.

As ever these rules gave us a terrific game. Despite it being a massive game we got through lots of moves and by 3:30 we had a winner!

The result means that we can now pause the campaign and move on to other stuff. Asienus is quiet again, for the moment.......