The Soldiers are Dressed in Red - the Quiberon Expedition of 1795 and the Counter-Revolution in Brittany. 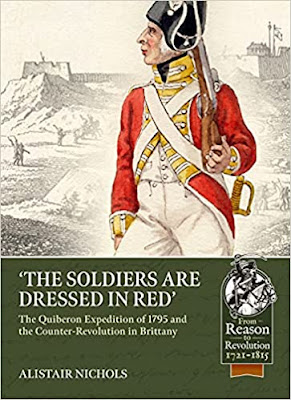 The Soldiers are all Dressed in Red. The Quiberon Expedition of 1795 and the Counter-Revolution in Brittany’ by Alistair Nichols is the latest in Helion & Co’s continually excellent and rapidly expanding From Reason to Revolution series, No. 91 in fact! I have been fascinated by the French Revolutionary Wars and the War of the First Coalition in particular for many years so I was almost chomping at the bit waiting for it’s publication! I was not to be disappointed.

This book provides the reader with a long-overdue English-language account of the doomed expedition, the express aim being to support the chouan uprising in Brittany but also to attempt to topple the French republican regime. The author has drawn on memoirs, archival material and other historical works and he seeks to provide a comprehensive account of what was in reality a joint expedition between the French émigrés and the British Government and place it in the context of wider events. In short, this book does what it sets out to do very well and in a very thorough and readable way.

The narrative takes us through every phase of this doomed expedition, from concept, planning, embarkation, disembarkation at Quiberon, the reaction of the Republican forces and then the series of bloody combats as the emigres vainly tried to hold their positions, followed by the capitulation, escape for many and for the majority, retribution. The accounts of the various engagements are very clear and I found it easy to follow events as they unfolded. The use of original documentation allows for some quite detailed analysis of how the expedition was faring,. One aspect that is with hindsight rather saddening are the capabilities ( or lack of) of the emigre commanders and their men, many of whom were fated to face a firing squad or worse. I said it was a doomed expedition from the start and the more I got into the book the more I understood the futility of the invasion and the hopeless situation of the troops once they were landed. I was also reminded that some of the emigre regiments (Royal Emigrants and the Uhlans Britainiques for example) were veterans of the campaigns in Flanders and the Low Countries so were no pushover in the final reckoning.

The book contains a number of black and white photographs of the Quiberon area as it is today as well as a range of particularly helpful maps of the region and of some of the actions that were fought after the landings. The eight central pages are as is usually the case taken up with some lovely colour plates. One of these, spreads over two pages, is an original work commissioned for the book and painted by Giorgio Albertini, depicting the aftermath of the attack on the Sainte-Barbe lines, which is stunning. The other plates are of a wide range of colourful Émigrée and no less colourful Republican uniforms printed courtesy of the Anne S. K. Brown Military Collection.

The book ends with three appendices covering the landings, the French Republican order of battle and some notes on uniforms. The Republican orders of battle are of particular interest to me as its not something I’ve seen before whereas the ´Emigré order of battle is quite well known already. Also, throughout the book are full details of the not inconsiderable number of British troops embarked but not committed to the invasion, (a possible ‘what if’ scenario perhaps) and the warships and transports used.

A fascinating and well written book, quite an easy read and one I can happily recommend