The Battle of Rossbach 1757: New Perspectives on the Battle and Campaign. 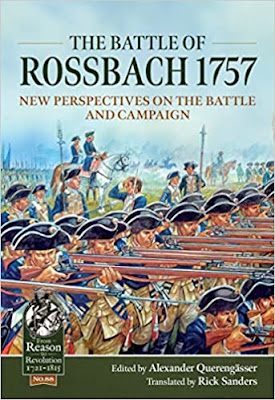 When I saw this was soon to be published I thought, ‘oh, not another book on Rossbach’. Well, it is just that, and more, but with a different perspective which makes it all the more interesting than a simple regurgitation of previous accounts would be. Helion and author/editor Alexander Querengasser have pulled it off again with this book, ‘The Battle of Rossbach, 1757: New Perspectives on the Battle and Campaign’ with a refreshing look at the battle with contributions from six respected historians, each with a different angle to explore. The book was originally published in German in 2017 but this translation for Helion by Rick Sanders is well written and structured, full of useful information and a really engaging read (I read it in one sitting ending at three o’clock in the morning and fell asleep with pencil notes and post-its all through the book!).

The book is split into six main chapters, each, as I’ve mentioned earlier, covering a distinct aspect for investigation. First there is an excellent chapter covering Prussia’s army on the eve of battle, next is a favourite of mine covering von Sachsen-Hildburghausen and the leadership of the much maligned Reichsarmee. My favourite chapter is that on the French army at Rossbach. I do like the French army of the eighteenth century, despite it emerging from a series of wars with a somewhat tarnished reputation. Nevertheless this chapter provides us with a useful and detailed breakdown of the army present at the battle, and some handy information on it was organised, it’s tactics and how it’s defeat impacted significantly on the army in the future. Further chapters explore the battle itself, an interesting look at the role of Saxony and finally the battle as a place of remembrance.
As one has become used to, the book is illustrated with many contemporary black and white images and a central eight-page spread of glorious colour illustrations, many of which are reproduced from contemporary paintings. One two-page specially commissioned painting by Peter Denis depicting the Prussian infantry in action against the French cavalry is wonderful on the eye.

Going back to the beginning of this piece, this new look at the battle is a welcome one, from my perspective at least, and I am sure many others with an interest in the Seven Years War will be similarly excited about the book which is No. 88 in Helions from Reason to Revolution series.
Interestingly, I’ve gamed this battle three of four times and the Prussians (or proxy Prussians in one disguised scenario) have never won as convincingly as did Frederick,  never loosing but coming close to a complete rout of the French and Reichsarmee only once.