War of 1812 playtest of 'Soldiers of Napoleon'

OK, so no sign of Napoleon or his soldiers on the table but I saw these rules at Partizan and thought they looked promising, or different.  I don't need another seat of Napoleonic rules as I'm confused enough as it is with those I already play, but, I thought, these are card driven, which is always fun (for the umpire at least hahahaha!).

Something smallish (what? will never happen!) was called for so rather than using my French Revolutionary Wars armies (sans Napoleon of course) I opted for the War of 1812 collection. It didn't take long to classify most of the different troop types in line with SoN, although some such as Native Americans and the various skirmish types and the mounted riflemen were tricky. As it was a multi-player game each of the players would command a single brigade (as it turned out a couple had two brigades).

I had an embryonic 1812 collection for a few years but have been seriously collecting and gaming the War of 1812 ever since Covid lockdown #1 and find it a fascinating conflict, so I was keen to see if SoN gave me something that Black Powder didn't. (I like BP and Gen D’Armee but as I'm a rules butterfly I'm too often prone to pick up others to try out).

It was a fictional encounter battle somewhere around the Lake Erie with the Americans trying once again to conduct a special operation and liberate the oppressed Canadians from their despotic British rulers.

Richard, Shaun and Nigel were the Anglo Canadians while John, Neil and Conrad were the American invaders. Apart from throwing back the Yankees the vital (?) bridges and road junctions were nominated as objectives. To accommodate the rule about off table artillery fire I said that there was a fort and a gunboat on the lake that would do the job if the card was played. The photos are a mixture of mine and Richard’s and have become hopelessly mixed up and out of order so apologies if this is confusing. [you should have been there to see what real confusion looked like during the game]. I've not captioned all the photos as they speak for themselves really. 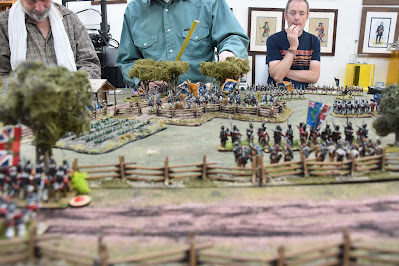 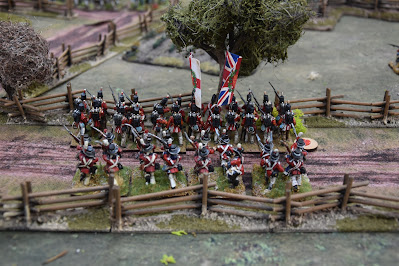 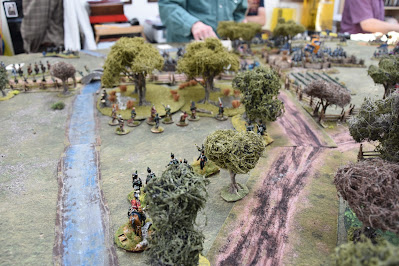 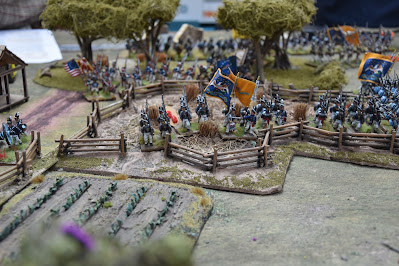 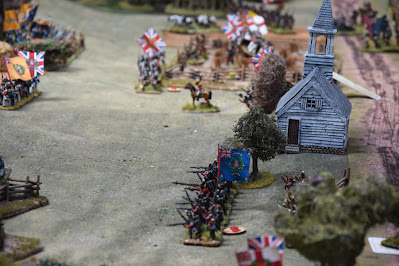 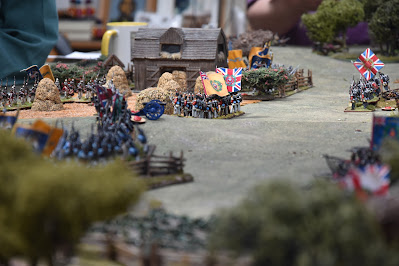 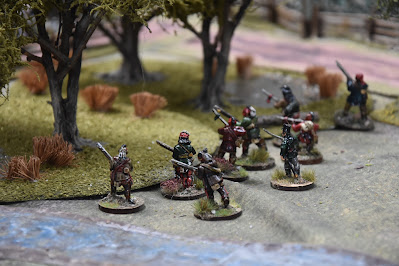 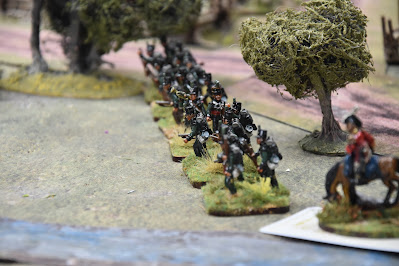 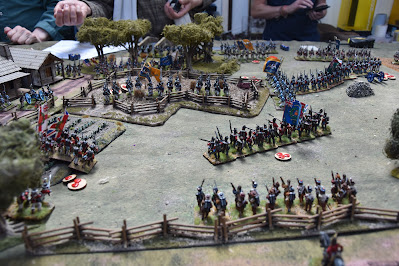 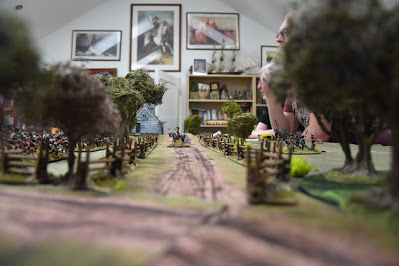 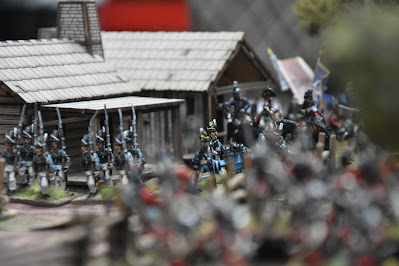 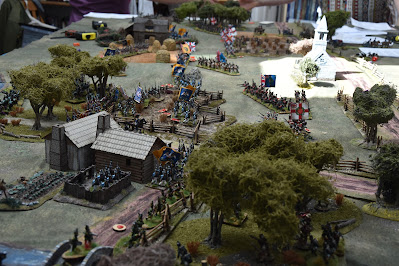 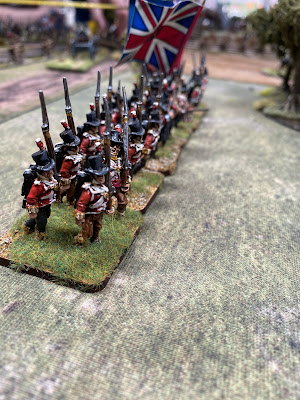 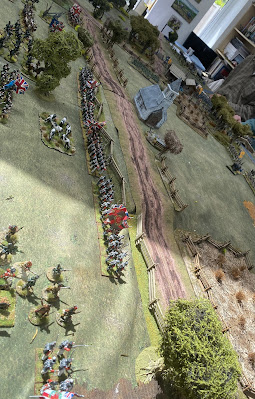 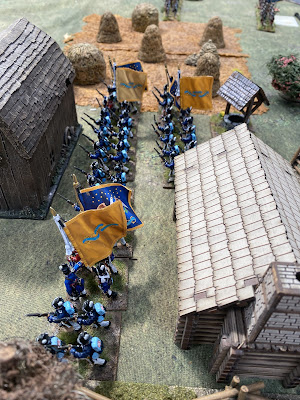 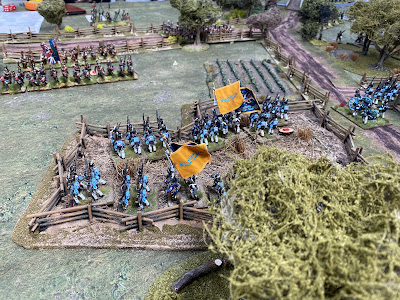 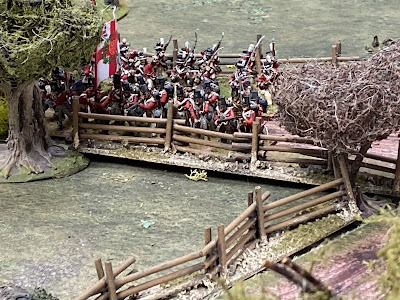 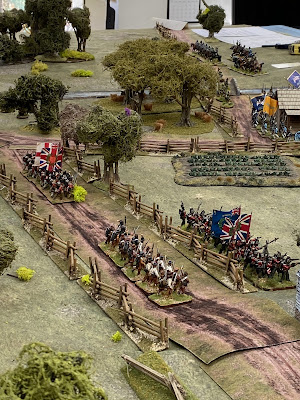 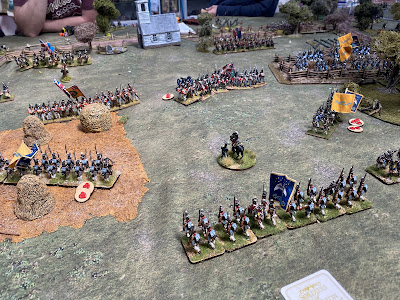 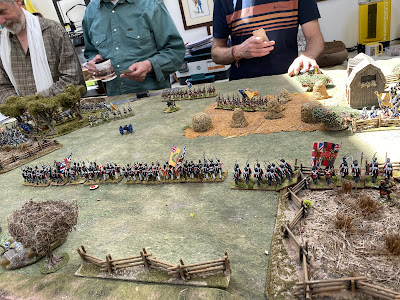 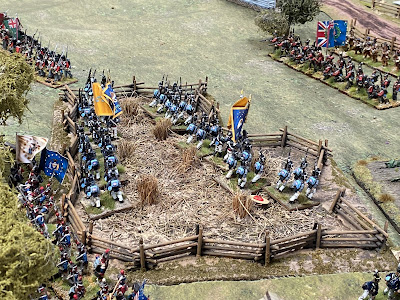 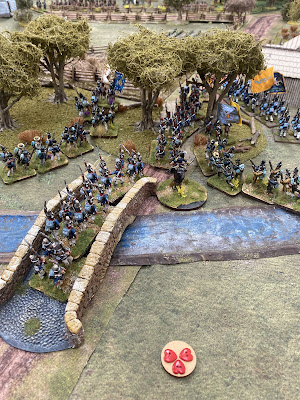 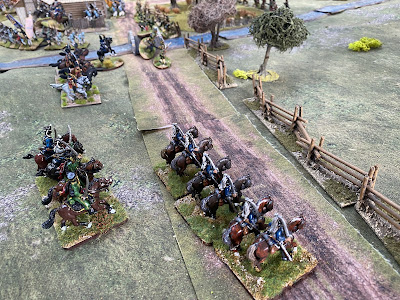 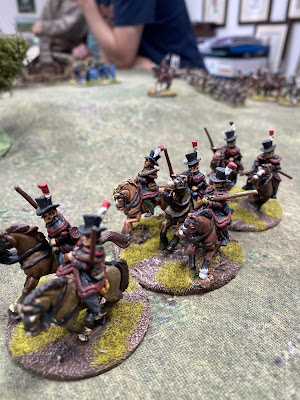 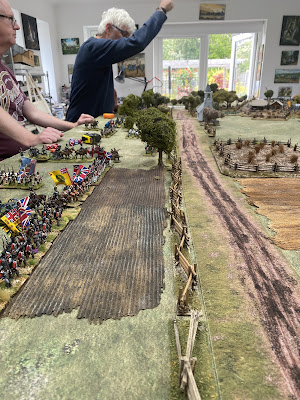 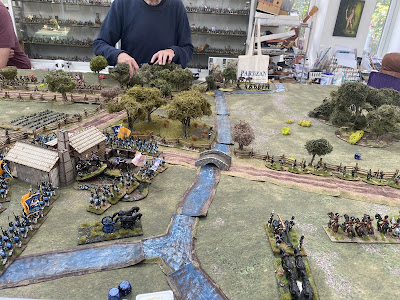 Suffice to say it turned into a bit of a bloodbath. The British pushed through the American centre, driving back or destroying several regiments of US  regulars, but loosing heavily in the process. There was little action on the British left and on the right they stormed the farm occupied by Neil's troops, but although driving the garrison off were repulsed. When I tallied up the VP's the Americans had a clear advantage so that and the tabletop objectives resulted in a small victory for their forces.

How were the rules? The mechanics worked fine and I shall happily play them again (in a European context perhaps) but despite the card driven nature of the game (which I really like) the jury is out until then. My only observations were an absence of ranges on the QRS (minor), the short movement distances for infantry, and doubts as to whether the rules can be readily and easily adapted for the big multi-player games that I run here at the Burrow. I accept that they're aimed at the later Napoleonic period (which does actually cover the War of 1812) and  I suspect one-on-one games on a 6' x 4' table rather than my monstrosity which meant that the two main battle lines took several turns to get into range of each other.  Overall, 7/10 for now.