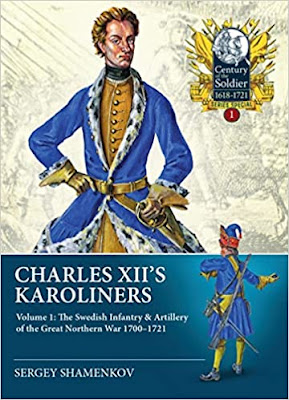 If I was to launch a ‘series special’ then this new book from Helion would, based on reading it, be the one I’d chose. No doubt about it, but Charles XII’s Karoliners, Volume 1: The Swedish Infantry & Artillery of the Great Northern War 1700-1721 by Sergey Shamenkov is one hell of a way to introduce a ‘series special’, with all the accompanying bells and whistles. Before I get going I will say that you must not think, ‘oh, not another book on the Great Northern War’, because while the other books (of which I own many) on the subject are great and all fit for purpose, this particular book is at least one step up the ladder in terms of what it seeks to do, i.e. to give us a forensic exploration of the subject matter.
I’m going to start with the pictures for a change, as this book contains a large number (61!) of glorious and characterful full colour original pieces (painted by the author no less) depicting a wide range of uniforms worn throughout the conflict by Swedish infantry; officers, grenadiers, guards, line musketeers, pikemen, artillerymen, and not just confined to native Swedish units but also those from Finland and the Baltic lands of Livonia and Estonia. There are also a large number of colour photographs of surviving uniforms and equipment (some of the latter being the result of recent battlefield exploration) to supplement the colour paintings, as well as a good number of contemporary colour and black and white images. There is no doubt in my mind that this is quite easily the best illustrated book I’ve seen from Helion in not only the ‘Century of the Soldier’ series but quite probably the other main series and from other publishers as well. Ever.

The book describes and discusses the formations, tactics, weapons and accoutrements of Charles XII’s infantry, together with the uniforms of the infantrymen, be they guardsman, grenadier, musketeer or pikeman. The different hat and coat styles worn, and every element of the soldiers ’ dress are covered in some detail. Officers’ uniforms and associated paraphernalia and weaponry are given separate chapters to the rank and file. Finally there are separate chapters covering the uniforms of Charles’ artillerymen and those of their officers.

The source material is comprehensive and includes information gained from previously unpublished or little known documents, and the book is well written, highly informative and an asset to anyone interested in the army of Charles XII, be they historians, artists, reenactors or gamers/collectors of historical figures to name but a few. Roll on Volume 2 is all I can say.
Paperback, 152 pages, ISBN 9781804510056
By Colin Ashton - August 05, 2022