These posts are getting later and later but what to do? Anyway……..

Last Saturday I was at the club in Durham for a massive refight of day two of Gettysburg in 54mm, organised by Conrad, Mike, Tim and his mate (who wrote the rules we used - 'Funny Little Wars'). It was a pretty large undertaking but whatever magic was woven to make it all come together worked, so come 10:00 a.m. on Saturday the table had been laid out and the troops deployed. I think the table was 24' x 12' with a gap in the 12' side so we could reach the troops. The figures were mainly Conrad's with some help from the other organisers and fellow club members. I think there were more than a dozen of us playing. Being a staunch Federal I took the role of General p Hancock and II Corps (in the photo above lining the ridge). Right up front and in the thick of it for the entire game facing a sea of grey and butternut, zillions of them, crammed together as they surged forward; a real butternut squash! I can't begin to try and explain what was happening elsewhere on the battlefield so what follows are some random pictures to give you an idea of how things developed. 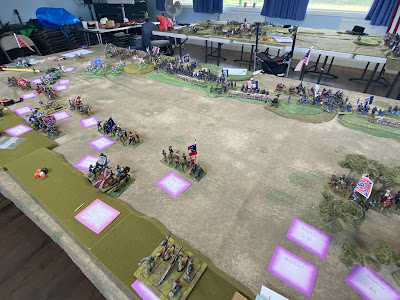 The photo above shows the Federal line along cemetery ridge, with the Round Tops several feet to the right out of shot. The second table beyond has the rest of the Federal line angled back to face the attempted envelopment by the Confederates.
Artillery fire was carried out using old (some very old) matchstick-firing models which was a skill you either mastered quickly or not at all. It was fun and not too many eyes were endangered. For canister fire we used party poppers, which was a real hoot. 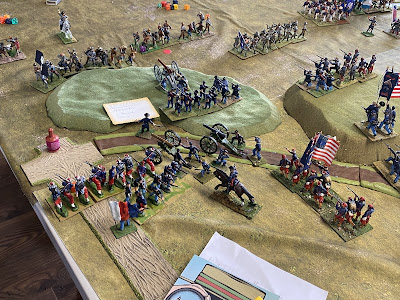 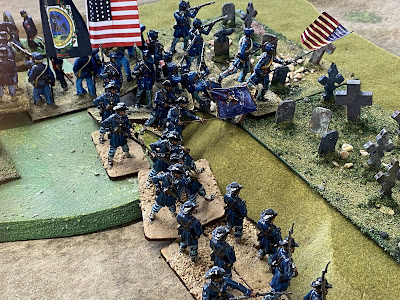 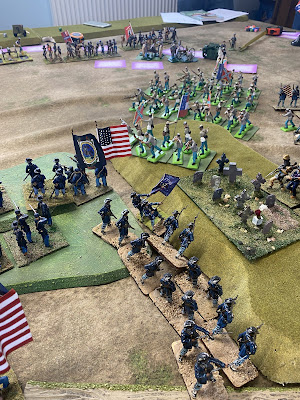 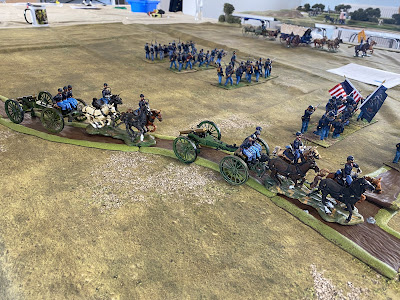 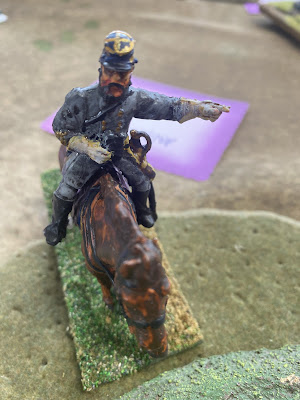 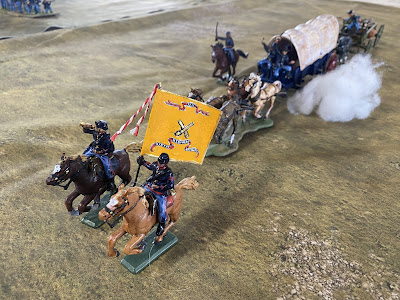 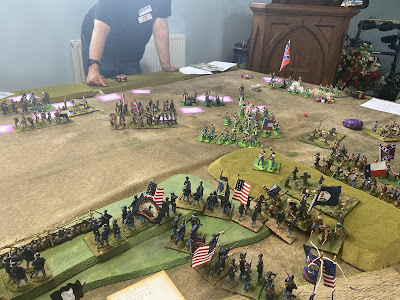 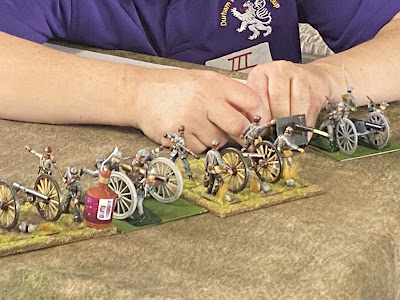 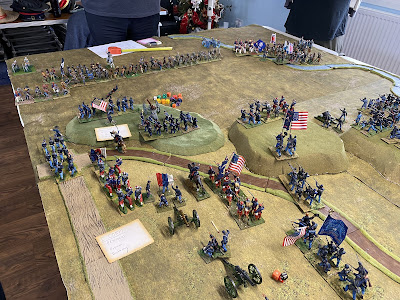 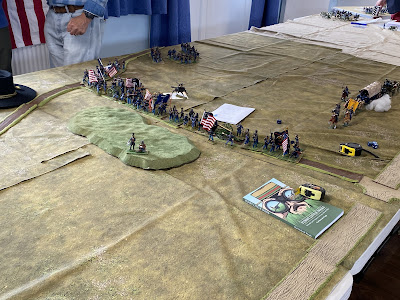 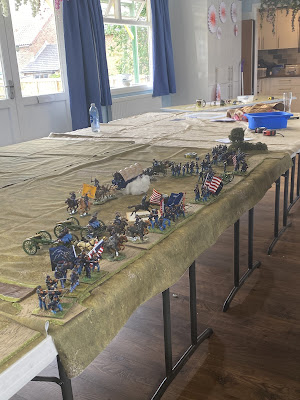 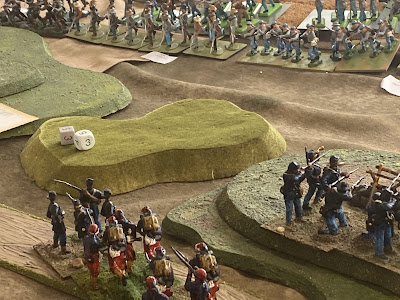 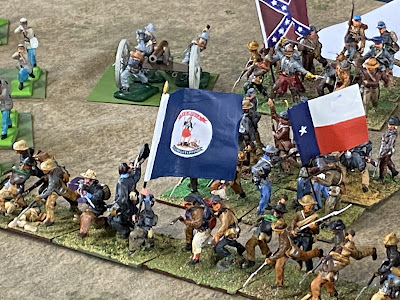 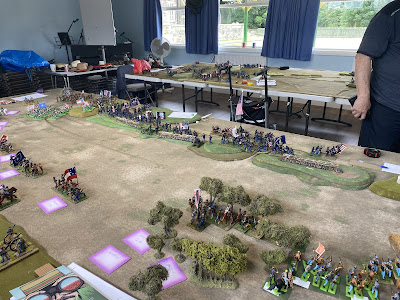 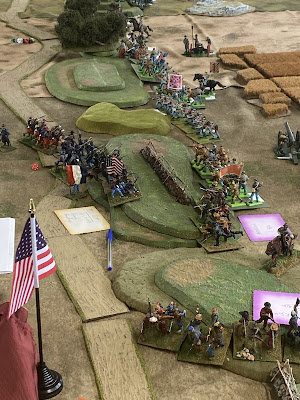 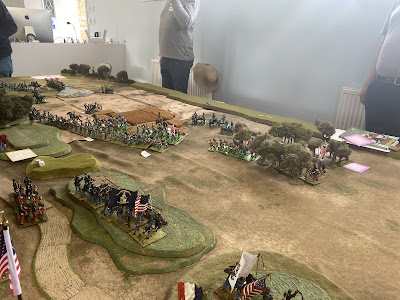 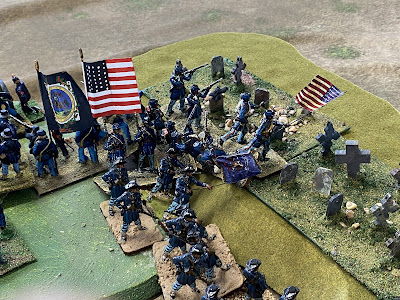 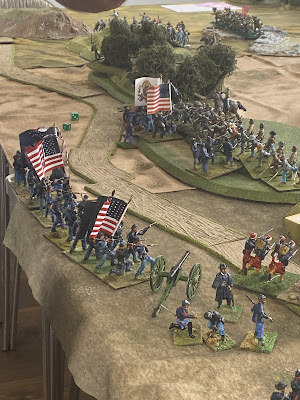 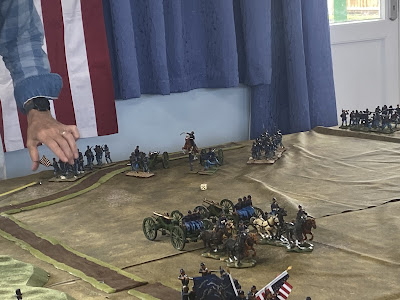 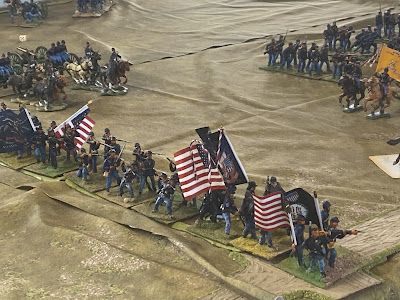 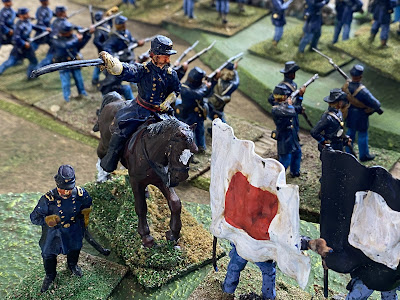 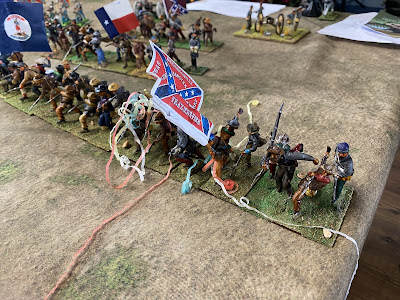 The devastating effects of canister fire 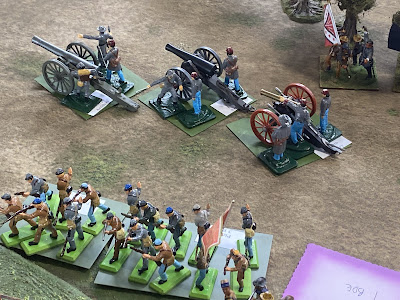 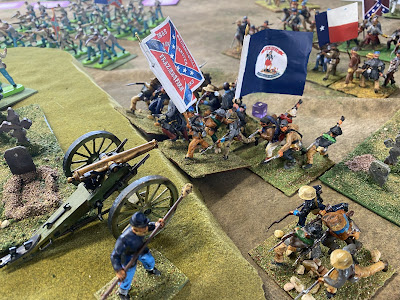 Thee Confederate forces destroyed Sickles’ command under Conrad but as Sickles had already been KIA by an errant matchstick he didn’t mind I guess. Hancock held on and the Rebs were unable to drive his men off the ridge. The Reb flanking attack also stalled although losses were horrendously high on both sides. Federal reinforcements were arriving all the time so we were not too fussed, well I wasn’t anyway. By late afternoon we’d treached 9pm game time so we stopped. It imho was a clear Federal victory. Rebel claims that they were victorious were baseless and ignored their staggering losses and the two corps of unengaged Federal reinforcements. Strategic sense would have dictated a withdrawal under cover of night by the Rebs. So say I.

Overall it was a very good game, enjoyable, and much fun, although it was a bit untidy for my taste, and no doubt we shall have another 54mm extravaganza next year. The armies were  tremendous especially Conrad’s artillery gun teams which can be seen racing into action in one of these photos.