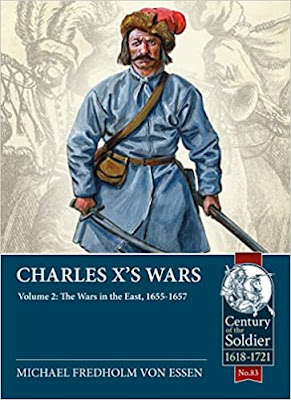 Charles X’s Wars, Volume 2 - The Wars in the East, 1655-1657 by Helion regular Michael Fredholm von Essen is another gem in the fabulously eclectic ‘Century of the Soldier 1618-1721’ series. As one would expect this book picks up where volume 1 left off, focussing on the ‘Swedish Deluge’, covering the devastating and somewhat complicated wars in the east between 1655 and 1657. The author begins with the Swedish-Commonwealth war but also describes in detail the simultaneous wars between the Commonwealth and Muscovy between 1654 and 1667, and Sweden and Muscovy from 1651 to 1661. While all this was going on the Ukrainian Cossacks were fighting against the oppressive behaviour of the Commonwealth.

The author presents us with the results of new research on the war rarely described in English. Describing the continued development of the post Thirty Years’ War Swedish army, he also includes comprehensive details of the diverse military of all the other combatants, i.e. the Polish-Lithuanian Commonwealth’s, Brandenburg-Prussia, Muscovy, the Cossack Ukraine, Transylvania, the Crimean Tatars and the soldiers of the Holy Roman Empire.

The book is beautifully illustrated with five pages of specially commissioned colour plates, depicting the flags in use by the belligerents. There are also a vast number of contemporary black and white illustrations, photographs of surviving fortifications and clothing and equipment held in museums, and some really useful and detailed maps, including several of some of the key battles fought during the conflict.

Indeed, the battle maps and orders of battle presented in the book are a tremendous asset to military historians and wargamers alike, and the list of units involved on all sides at the massive three-day battle of Warsaw is fascinating, as is the narrative describing the battle. In fact the whole book is like this, covering as it does the vast area covered and the many belligerents involved, and it worth remembering that the scope of these wars was so vast that it simply is not feasible to only cover the Swedish-Commonwealth war to the exclusion of the other contemporaneous conflicts. My favourite chapters are those covering the Muscovite invasion of Finland and Swedish territory along the Baltic coast and the involvement of the Transylvanians ( much assisted by Helion’s earlier works on the Muscovite and Transylvanian armies of this era where we have a helpful overlap).

If you have volume 1 of this series then you are already equipped with a wealth of information about the troops and armies involved and this volume applies what has been described in the earlier volume within the context of the war (or wars). I for one am looking forward to the final volume of this series which covers the Danish Wars and the conclusion the wars in the east.
Another tremendous addition to Helion’s rapidly growing catalogue of what was once full of books on rather niche topics that have now evolved into something much more mainstream.