This post is appallingly late but much activity surrounding the Burrow last week that got in the way of hobby time. This game actually had a young General Buonaparte in command of the French army in this fictional encounter set in the ‘imagination’ Republic of Waldensia, up in the Italian Alps, landlocked between France, Piedmont and Switzerland, all of which is irrelevant to this game and geographically somewhat far fetched, but I’ve had armies fighting over this part of Italy from the Italian Wars onwards so like to maintain the back story if only for my own amusement.

It was a straightforward encounter battle with beating the enemy being the only victory condition, although I suppose NOT loosing would be another equally-ranked objective. The rules generate Victory Points for one side or another, usually for gaining some minor goal or killing an enemy unit, as  game unfolds which is quite a nice touch.

Conrad was the child Napoleon, supported by John and Shaun. I played GL Melas the Austrian CinC, with Dave and Paul as my subordinates. Both armies were of roughly similar in size, but the Austrians had  a slight advantage in numbers and to a certain extent troop quality. Except for the Piedmontese division, which I mainly classed as militia, if only as this was to be their first appearance on my tabletop. The terrain was deliberately quite congested, to try and reflect the Italian practice of surrounding fields with ditches and said ditches and other streams were thick with vegetation, slowing movement and impeding visibility. It looked quite nice anyway.

The French deployed all their infantry on the battlefield and left both brigades of cavalry off table as the designated reserve. Conrad commanded the Polish brigade as well as being CinC. Shaun was in the centre with two brigades of French infantry and John was on their right with another French brigade and the gorgeous chocolate-box uniformed Lombard Legion. We held the Piedmontese division in reserve, due to join the game from turn 3 on our right, which was held initially by a single cavalry brigade, with two Austrian infantry brigades in the centre and another on the left, supported by two regiments of hussars. 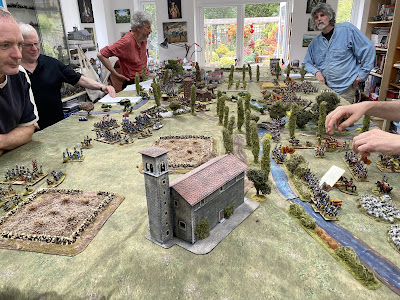 Initiative went to the French to start with (and for most turns in fact). The cards were dealt and the CinCs issued them to their subordinates as they saw fit. I like this aspect of the rules as it forces the commanders to make some important decisions under pressure as they attempt to organise their battle plan using whatever cards they’d been dealt.  Their army began a general advance to try and capture the town, the monastery and the high ground in the centre. The Austrians, being experts at lumbering, lumbered forward slowly but smartly. I will let the pictures tell the story of the battle, so buckle in, tray tables put away and seats upright and we shall begin. 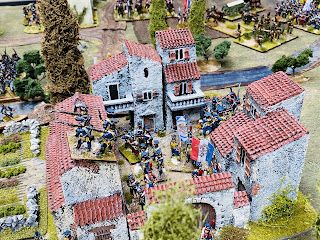 For those interested here are the OoB for the game.

CinC to allocate brigades to the ‘divisional’ commanders, also deciding which brigade(s) will form the reserve. Piedmonte bdes must be brigaded together.