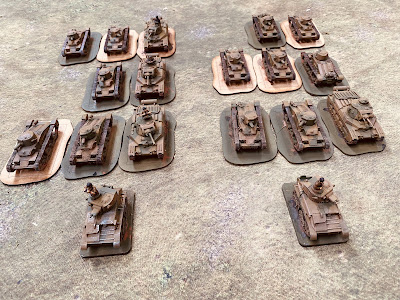 Ok, so after after an aversion to internal combustion engines that goes back to my early teens regarding WW2 gaming readers of this blog will know that I began a project to create the forces for the 1939 Winter War. Armed with a temperamental 3D printer I built up a pair of nice armies. I was then moved to look elsewhere for another project and plumped for the Fall of France. Before my printer went off on in protest once again I managed to get it to print a bunch of Matilda I tanks for the British and a selection of soft skins.

So, apart from decals and the bases I have the 1st Army Tank Brigade, equipped with Matilda I and II infantry tanks.