"I think the King will lose this day" said Marshall Daun before Kolin. Was he right?

The first game of the year was played out yesterday, a large refight of one of my favourite Seven Years War battles, Kolin. It was a full house, and Conrad, Richard, John the Red and Nigel were the Austrians while Dave, Paul, Shaun and John H were the Prussians. I decided to use Black Powder with some of our usual house rules.

Notes on terrain. Troops shooting through or into the standing crops did so at -1. The hedgerows and tracks are representing sunken lanes. Troops in the sunken lanes benefit from cover but if behind the hedges themselves they do not. 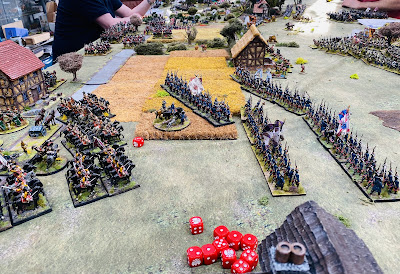 The Prussian right, with Conrad's Austrian cavalry in the distance behind the Prussian lines.

I did a quick roll call and it showed that the Prussians were in deep trouble. Their hussars and cuirassiers on the left had been destroyed and the infantry attack in the centre had been stopped, due largely to a dogged Austrian defence but also to the presence of enemy cavalry on their flanks and rear! Only on he Prussian right was anything going reasonably well, but it was too late. John H's infantry had driven back Richard's Austrian battalions and his cuirassiers had caught up with Conrad's roaming horsemen in the rear of the army. However, by now over half of the Prussian army brigades were in retreat, off the table or were broken and retiring. Many of the troops in the centre would be unable to retreat due to the Austrian cavalry and would be captured. In fact only John H had troops actually under orders!
All this and it was only 2pm real time, and after no more than six turns the Prussians had been comprehensively defeated. Quite an achievement but there was definitely something awry with the Prussian dice rolling yesterday. Conrad's mad charge around the Prussian army would probably not have happened or been as successful if he hadn't been able to get the three moves needed to cross the battlefield and thus delay the Prussian reinforcements. The Prussians needed these infantry to press home the attack but they had to do without them.
This was a splendid game and despite the early finish was thoroughly enjoyable. It was also a major boost to my gaming mojo after a couple of months of illness, uncertainty over my wife's health and a touch of le cafard. Black Powder worked really well again as usual. While not my favourite ruleset for the SYW they're easier to manage than, for example, Honours of War, where the alternate move and fire system for opposing brigades would have slowed things down significantly, and not everyone is familiar with Paul's Panoply of War set. Everyone is familiar with BP and they work for big games such as this.