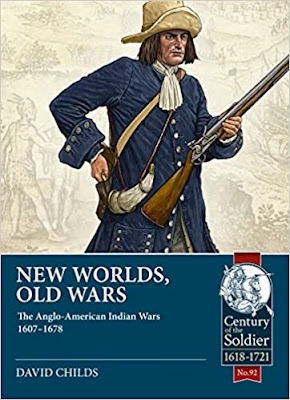 Number 92 of Helion’s Century of the Soldier series is another, not quite niche topic, covering the Anglo- American Indian Wars between 1607 and 1678. Author David Child’s has done an excellent job presenting a very readable account of the establishment and growth of English settlements in North America. In Europe, the great powers were busy fighting and bleeding each other dry in pretty much continuous conflicts such as the Thirty Years War, the British Civil Wars, various Anglo-Dutch and Anglo-French conflicts. Meanwhile across the Atlantic these same powers, although primarily the English (British), were busy establishing settlements and fighting the indigenous population (not always successfully) and each other for the much coveted wealth of the New World.

This is perhaps remarkably the first book I have read on the subject. While not making excuses for the behaviour of the European settlers towards the Native Americans, it remains a fascinating account of the period, focussing on the Powhatan Wars of Virginia, Smith’s War 1607-1609, Dale’s War 1609-1613, then moving to New England for the Pequot War, and King Philip’s War and the Abenaki War in Maine between 1675 and 1678. These were not massive European-sized conflicts, but equally bloody wars of ambushes and massacres, and the descriptions give a good insight into how the Europeans and Native Americans set about trying to destroy each other. Indeed chapter 10 is entitled Conclusion and Consequences- How the East was Won. Here, the author sums things up nicely. The Native Americans were doomed to loose, despite their often superior tactics and field craft, and we learn in detail how and why the Europeans slowly eradicated any threat posed by the indigenous population.

The book is well illustrated throughout with a wide range of contemporary and present day black and white images and includes several interesting maps of the Colonies (again, both contemporary and modern). A good selection of appendices finishes off the book, where we are able to read, among other things, examples of contemporary correspondence, both official and private.

I really loved reading this book and I learnt a great deal from it, and Helion are yet again to be commended for bringing topics such as this to our attention. If you have an interest in the early days of the colonisation of the east coast of North America (Virginia and New England specifically) then this book is for you. Highly recommend.