Lots of Valour but lacking in Fortitude……

……on my side of the table at least. On Tuesday afternoon John the Red and I tried out the new Valour and Fortitude fast play, back-of-a-fag-packet rules from the Perry Twins and Jervis Johnson.  We kept things simple with two brigades of infantry, a brigade of cavalry and a battery of guns each, although to maintain my preference for asymmetrical army composition the French had an extra battalion, compensated for by the British having a battalion of Footguards.

John took the French. I was using troops from my Revolutionary Wars French and British collections as I don’t own any ‘proper’ Napoleonic Wars armies. (John pointed out correctly that actually I do, with 1806 Prussian and Saxons and 1812 British and Americans, but no French). I’d set the table up for a straight meeting encounter with both sides fighting to control the crossroads, bridge and the plateau. 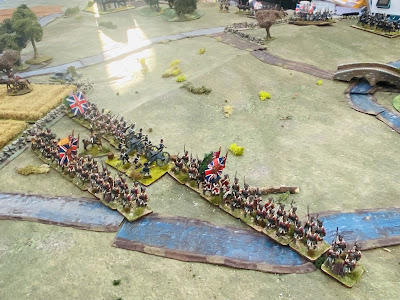 I will give my feedback on the rules at the end but here are some photographs of the encounter with a few words of explanation. The official (i.e. mine) view is that as the game was a play test normal restraint and common sense went out of (my) window. Read on………