This week John came up for a game as usual but I also invited Conrad Cairns as he wanted to get the hang of Warlord's Pike and Shotte rules somewhere quieter than at the usual Thursday mayhem at the Durham club. 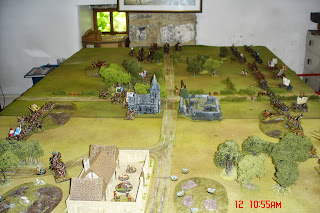 The imperial army fielded quite a few more troops, as follows, commanded by Tilly

There were 4 objectives for each side to fight for, with one of these being randomly chosen in secret as the primary objective. These were the farm, containing prisoners to be rescued, the church containing plate and treasure to be looted, the graveyard with a buried pay chest, and the shrine, containing some secret papers. Unbeknown to each other the Swedes' prime objective was the farm, the Imperialists the shrine.

Both armies deployed traditionally, with horse on the wings and the foot in the centre.  My right wing looked like it was going to struggle as I had 4 horse and 2 cuirassiers facing 4 cuirassiers, 5 harquebusiers and 1 unit of Croats. My rather brittle Saxons were also on the right/centre facing imperial dragoons, a brigade of foot and the imperial heavy guns. The excellent 'Swedish' foot were strung out thinly along the centre facing 4 regiments of imperial foot, with my last brigade of horse, which included the Finns, on the left facing cuirassiers, harquebusiers and Croats. My saving grace was the commanded shot attached to each of the brigades of horse. My dragoons were also on my left ready to try and occupy the farmhouse and secure our main objective as quickly as possible.

The Imperialist got to go first and made slow progress as they threw some poor command dice, especially John's centre brigade. Conrad's left wing did get to move and the dragoons made for the hedge line and the shrine. 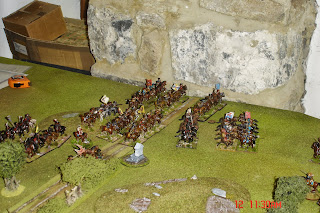 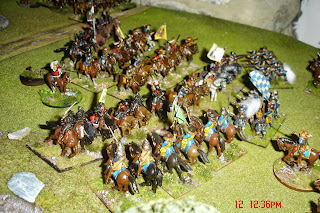 (Above: cavalry clash on the Swedish right. Below: "The push is coming here") 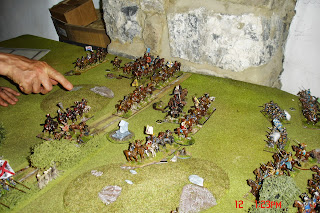 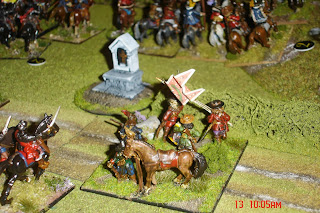 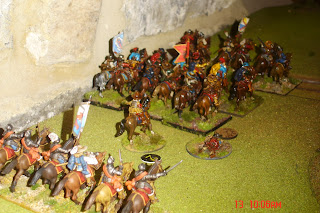 So, continuing with the Imperial left, his horse swept forward but were unable to get any charges in. I. Used my commanded shot to pepper his leading u it's and drove one off, then charged. I can't remember the detail of the combat, but essentially, my horse were almost always bested in combat but not broken, by the Imperial cuirassiers, and in what turned out to be a furious series of charge, more often than not a failed one that didn't contact their target, and counter charge, the Swedes finally wore the Imperialists down even though my cuirassiers failed to make any forward move, ending in a blunder. Eventually, Conrad's first brigade of horse was put out of the fight as over half it's units were shaken. 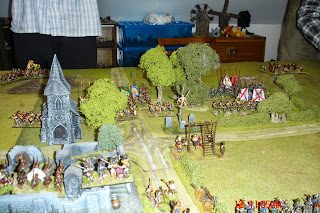 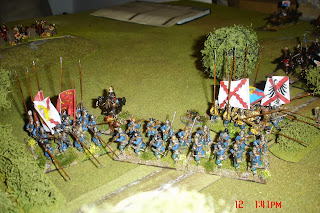 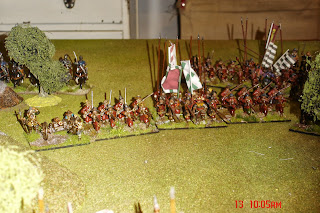 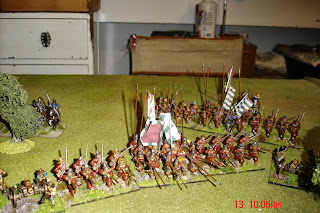 In the centre I moved the Yellow brigade up slowly, while the 'White' regiment occupied the graveyard. The 'Blue' regiment moved up level with them and entered into a firefight with the Imperialists to their front, disordering their pikes thus preventing them from charging. The 'Blue' regiment also enfiladed one of Conrad's Imperial pike blocks and with a combination of point blank artillery fire and musketry forced them back shaken. Conrad's other regiment charged the Saxons and almost beat them in the melee, but in the second round they failed their break test and ran. The shot belonging to this brigade had already taken some losses and one unit was broken. Other units of this brigade were also shaken so this brigade became ineffective and unable to take any further offensive action. My leading Saxon regiment was pretty beaten up though. 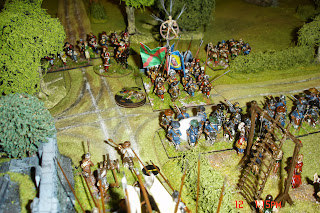 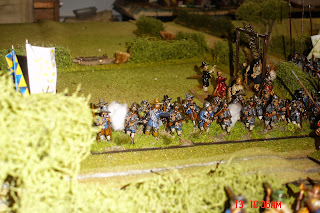 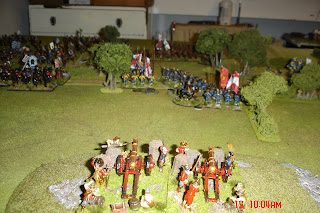 (From behind the Imperial battery and Swedish Yellow regt) 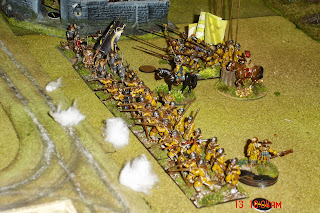 Meanwhile, John's regiments had occupied the church and were trading fire with my musketeers in the graveyard and with the 'Yellow' regiment. nobody was going to give any ground around the church or graveyard so John charged my line, hitting the Swedish Household Company (the commanded shot in the Yellow Brigade, with a pike block. Amazingly the musketeers won the first round of combat having failed to do much damage with closing fire. In the following round they broke the Imperial pikes and that was more or less where we left it in the centre. 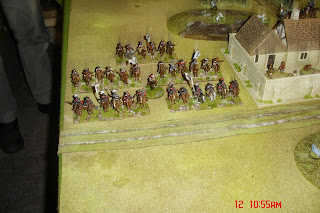 (Imperial horse on the Swedish left and dragoons occupying the farm) 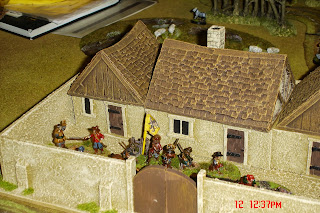 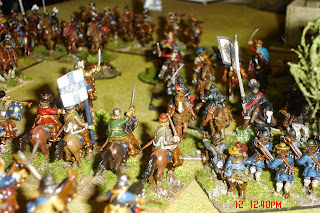 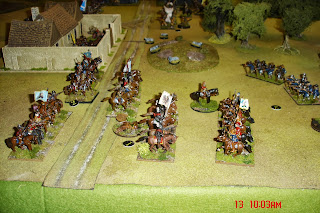 On the Swedish left my dragoons had raced forward to occupy the farmhouse and were taking pot shots at John's imperial foot on one side and whatever horse strayed too close on the other, causing the odd casualty. Our opposing wings of horse closed and as usual my Swedish and Finnish horse were no match for the Imperial cuirassiers. Again, no units were broken, just forced to retreat. What saved the |Swedes on this flank were the commanded shot who kept knocking the odd casualty off the Imperial cuirassiers and harquebusiers, and more importantly, disordering them. Even when charged they held their own thanks to some very good dice rolling on my part. Eventually, after a hard slog and countless charges, counter charges and melees, the Imperial brigade became shaken. With half the Imperial army now shaken the army was broken. We decided to call it a day as all I had to do now was advance and the enemy would be forced to retire before me. 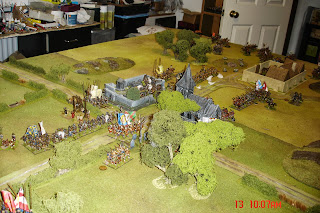 Everyone enjoyed the battle as it was quite a close game notwithstanding the final outcome. I'm not sure the points system is quite right, but its only intended as a guide anyway. What saved the Swedes was their firepower, especially the commanded shot. The imperialists could not stand face-to-face against a Swedish regiment as they would be outshot every time: 2 units of shot against 3 of shot and a light gun. The Imperial horse was superior on the day whenever it got into contact but all too often they failed to charge, didn't make it into contact, were disordered by the commanded shot or, unable to counter charge, were held up or occasionally pushed back. On reflection I should have had more open terrain, but I don't like bare battlefields. Next time. 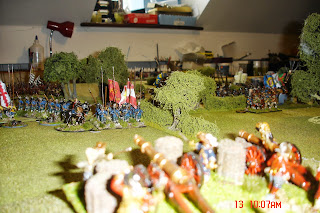 "Ineffective unit of the day" was the Imperial battery which failed to score a single hit the entire battle.