Or was it just a replay of last week's debacle? Well, surprise surprise, as it turns out it was a totally different result. 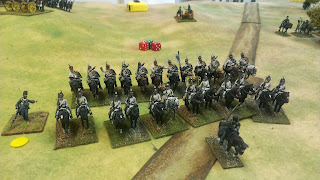 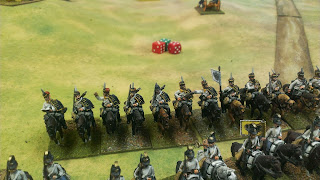 [Austrian cavalry en route to the battle]
We fought this at the club on Thursday evening. The terrain was changed from last week so it was slightly less open and there were areas of dead ground. The Prussians had the same forces but the Austrians had been short changed last week in terms of corps reserve artillery so were given four
guns instead of last week's two. 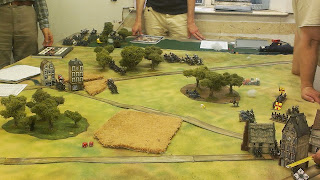 I had a plan which the others (Nigel Conrad and John) were happy to go with. Essentially one brigade ( four btns of infsntry, one btn of mager and a gun) and the cavalry (one regt eachof hussars and cuirassiers) would operate on the left flank and gloriously sacrifice themselves holding down whatever Prussians were deployed on that flank or left of centre. Meanwhile the reserve artillery
would push forward and occupy the prominent hill in the right/centre of the table, the remaining three brigades of Austrians totalling 13 btns and 3 guns would form into storm columns and assault the Prussians with the bayonet, with a bit of softening up by the artillery massed battery. 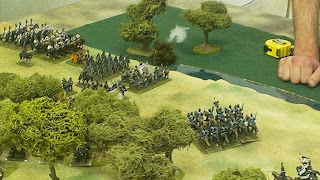 
Move one gave me a feeling of déjà vu as Conrad's brigade failed its command role. The Prussians had deployed a brigade of infantry right up to within a foot of the Austrian base line occupying a village and a wood, supported by uhlans and dragoons. A lone battery of two guns was deployed further back on the edge of a wood but had little to shoot at the entire game. Conrad's troops entered the game the following move and entered into a furious and bloody and very private fight with the Prussians. They stormed forward and took some heavy and effective fire from the Prussians in the wood. The Prussian cavalry charged and forced one btn into square. The uhlans charged next move and broke another disordered square, made a sweeping advance and smashed into the flank of another Austrian btn, who also broke, taking a gun with them in the process. A third Austrian btn was locked in melee with Prussians and the Austrian cavalry were exceptionally inept as they failed all their command roles and just sat there looking pretty. Conrad had done well in pinning down half the Prussian army by a series of glorious sacrificial charges into the face of needle guns, and hopeless  melees. Job done. 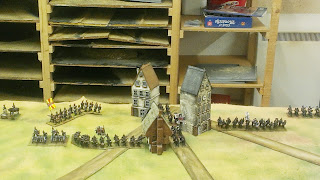 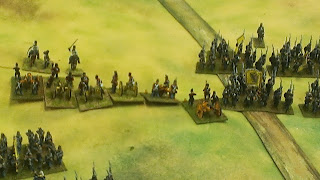 Over on our part of the battlefield Nigel made a slow entry onto the table, while John and I threw good command dice and were able to make three moves towards the Prussians holding the village. By the end of turn two the reserve artillery had deployed on the hill and in the next turn started pounding the Prussians to great effect. Nigel caught us up then as well, Just in time for John to charge the Prussian line. He survived the closing fire and hit a btn of jagers, breaking them in melee. (Same btn of jagers who ran away last week!). He then hit another btn of newly arrived reinforcements and drove them back as well. My brigade charged more of the reinforcements and again survived the closing fire, this time without significant losses. Meanwhile, the grand battery hammered a Prussian btn which became shaken. This resulted in the entire original brigade becoming  shaken and a spent force as half it's units were shaken or broken. Nigel's brigade charged in and drove off another btn and two guns, while my grand battery turned its attention to another unit and gave it a damned good thrashing! 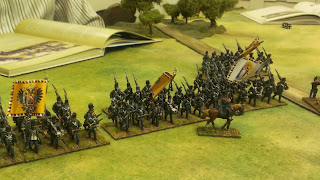 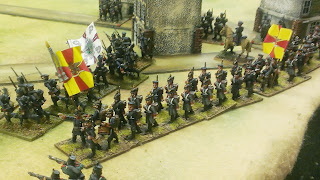 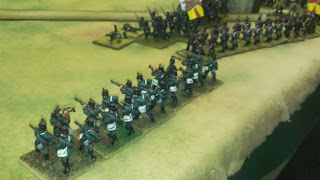 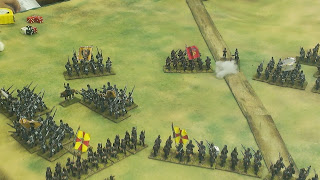 At this point the Prussians had one spent brigade destroyed or retreating off the table, with another in the process of being driven back thanks to weight of numbers and the effects of the massed artillery fire. They conceded the game on that basis even though they technically held onto the two villages which were the objectives of the game.

I enjoyed the game as my plan actually worked. We weathered the needle guns largely due to weight of numbers and the save of 3+ for Austrians in attack column. Being able to re-roll one D from missed artillery fire also helped. I think we were all quite surprised that the Austrian actually won but if it was a foregone conclusion what would be the fun in that? And they did beat the Prussians at Trautenau and have some limited local success at Konigratz so not unrealistic. 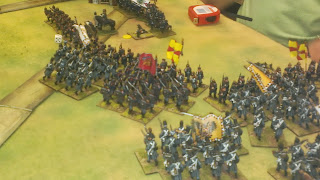 [Prussian collapse and despondent Prussian commanders before departing for the pub] 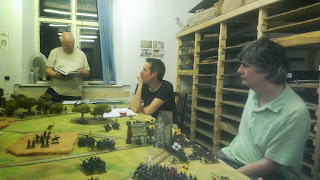 Next week Franco-Prussian War at the club. Thirty Years War at my house on Friday so watch this space. as this is my 100th post a big thanks to my followers and for all the positive comments received, both on and off line.
By Colin Ashton - August 23, 2013