Poles blunder their way to an inconclusive end! 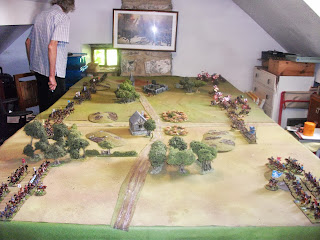 Two more games this Thursday (yesterday). John came up after lunch and we played another Renaissance game with Pike and Shot, fielding my Swedes and Poles. We diced for sides and I got the Poles. The game was an uncomplicated line up, with two objectives to be fought for along the centreline of the table, a toll house and a churchyard. The Swedes had six squadrons of horse, two squadrons of Finns and two squadrons of cuirassiers, organised in three brigades. Each mounted brigade had a contingent of commanded shot, and one had light guns as well. They also had one brigade of two large regiments of foot (I give the Swedes three 'sleeves' of shot and a pike block per 'regiment'), and another of one regiment plus an additional unit of commanded shot. Each had a light gun attached. The Swedes were commanded by the man himself, Gustav Adolf. 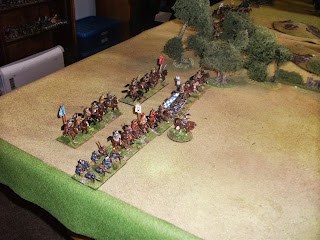 (Swedish and Finnish horse seeing off the Cossacks) 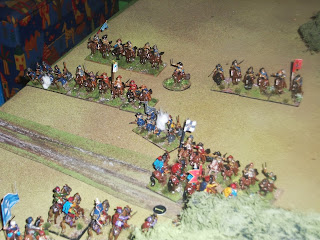 The Poles had five squadrons of Hussars, four of Pancerni and eight of Cossack light horse, plus a single squadron of Tartar light cavalry, organised into three 'brigades'. They also had a brigade of Krackow militia (with the militia rule but otherwise treated as normal Polish infantry minus the axes!), and a brigade of two regiments of mercenary German infantry supported by two mercenary  medium guns. The rating of the Polish CinC was decided randomly and he ended up being a very poor '7'. :o(


The Swedes moved first, or at least would have but for a fair few failed command roles. They kind of edged forward a bit here and there. The Poles advanced along the whole line but I didn't want to risk a fast advance at this early stage of the game due to close nature of the terrain and the Swedish superiority in firepower. 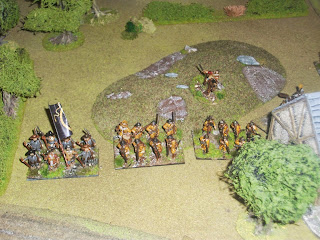 For clarity I'll cover the action for each sector of the battle, so on the Polish left the Cossacks closed with the Finnish and Swedish facing them and true to my impetuous nature attempted to charge. Only one unit made it but was beaten conclusively in the melee and withdrew. The Swedish commanded shot made quite a contribution and began causing some casualties on the Cossacks. For the rest of the game the Swedes/Finns and Cossack battled it out. One Swedish unit of horse was shaken and withdrew, as did another towards the end of the battle. However, the Cossacks were ground down and pushed back until over half of their squadrons were broken or shaken, at which point the brigade was spent.

In the left of centre part of the table the German mercenary regiments advanced towards the toll house, taking fire from the dragoons John had raced forward to hold it and the Swedish Yellow regiment. The German advance was stalled as John kept disordering one or more units each turn. The dragoons were eventually driven out of the house, but replaced by a musketeers from the Yellow regiment. A pike assault on the house was repulsed and both sides spent most of the game taking pot shots at each other. I tried to charge my other pike block at a shaken musket unit but failed to make contact. I had numerical superiority but the Germans were not quite as good as the Swedes when it came to shooting, morale and stamina so we hung on until the end of the game arrived.

Skipping the right centre for now, on the extreme right both sides moved slowly towards each other. I declared a charge with my hussars but despite getting three moves fell short by an inch!!!!!! My supporting units of Pancerni and Cossacks failed their command roles or couldn't get close enough so there I was with two squadrons of Poland's finest exposed in front of the entire Swedish left flank! John charged one unit in the front and flank and took pot shots at the other as his unit facing them was disordered and couldn't declare a charge. In the melee the Poles proved to be very tough and drove off the horse facing their front in the first round and then beat off the flanking unit in the second. This left the Swedes with some very scattered units of horse and dangerously exposed commanded shot. The next turn I declared a charge with the Hussars in what should have been a battle-winning move. Should have was the operative word as the general threw an double 6 and blundered. The entire command was now unable to move. Bugger I thought! We will return to this flank shortly. 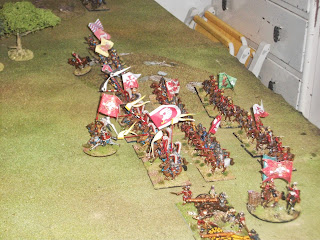 Meanwhile in the right/centre sector the Krackow militia advanced against the graveyard and traded fire with the Swedish Blue regiment. Despite some losses they soon took the upper hand and drove off one of the musket units and occupied the graveyard. Job done. 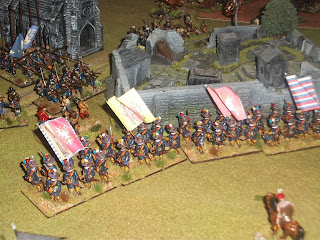 (The fight for the churchyard) 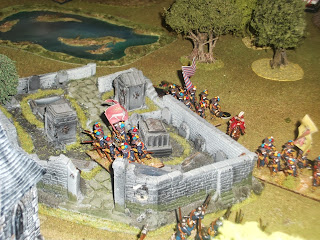 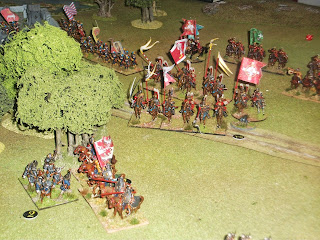 The other 'brigade' of Polish horse were in the centre, poised to charge to glory. The leading Hussar units were peppered with shot and were disordered although one unit did charge home and push some Cuirassiers back. Pancerni followed this up with an unsuccessful attack on some Swedish shot. I ordered my remaining Husssar unit to charge and, yes you guessed it, threw a double 6, so they blundered off to the right and that brought the big push in the centre to a halt. 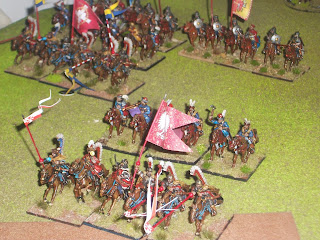 Back to the right flank, immediately following the blunder in the centre, I again ordered the Hussars to charge. I could not believe it when I threw another double 6!!!!!! The blithering idiot in charge of this flank had only just passed the blunder dung heap on to one of his compatriots barely two minutes previously. Obviously s**t does stick. 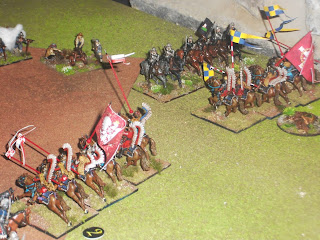 Time was the eventual victor so we left it there. An inconclusive end, but if my charges had got in the poles would have won the day we agreed.