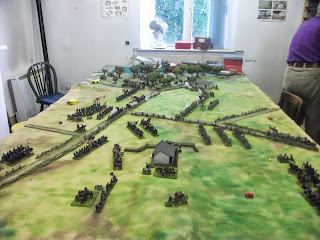 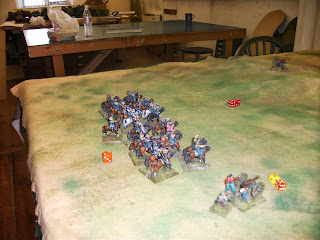 (Shaken Confederate cavalry loitering on the edge of the battlefield)
This week at the club we concluded the ACW game started last week. Paul had set up an encounter battle with pretty much evenly matched sides numerically. Four brigades each of infantry with supporting artillery, and a brigade of cavalry. The Federals had four units in each brigade but two regiments were classed as freshly raised. The Confederates had three units in each brigade but were all classed as tough fighters. The Federals were armed with MLR muskets, their enemy with SB muskets. There were three designated objectives; the crossroads on the Federal left, the stretch of road in the centre running towards the Confederate base line, and the far,house on the a Federal  right. 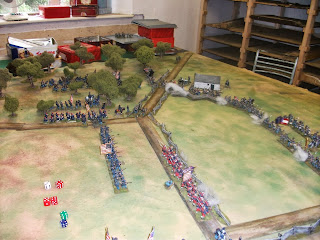 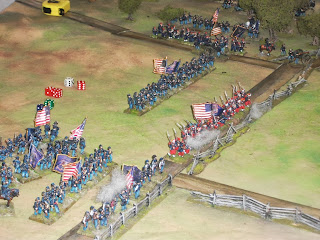 Last week (no camera and dying phone so no photos, although this week the camera was on its last legs again) saw both armies enter the battlefield, dicing for when they arrived and where.  This probably favoured the Federals slightly as it turned out. The Federal cavalry made right for the farmhouse on the right and occupied it. The Confederate cavalry decided to charge the dismounted cavalry outside the farm but due to the Federals having breach loading carbines and some extreme dice throwing were eventually driven off shaken and no longer able to take part in the battle as they were a spent force. 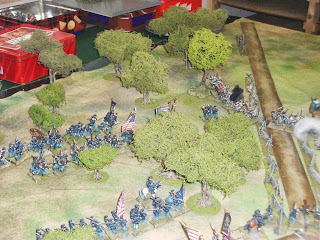 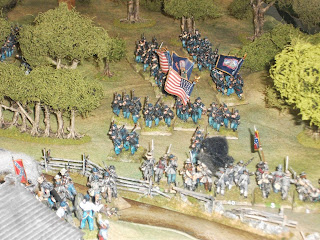 (Above and below, the fighting in the woods) 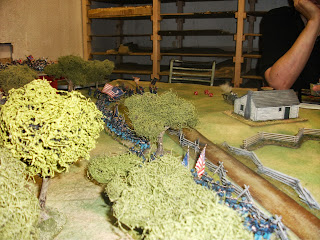 On the Federal left a firing line was deployed along the road while a second brigade tried to outflank the Confederate through the woods. One regiment at the apex of the Federal line was exposed to the fire of three Confederate regiments and a gun and quickly destroyed. Nevertheless the line held and over the course of the battle the flanking Federal brigade drive off the opposing Confederate brigade, completely smashing it. In the centre the elite zouave regiment was destroyed, throwing a double 1 for an all important break test! Federal forces on the right tried to attack the flank the Confederate centre but were themselves hit in the flank by fast moving Confederate reinforcements. The brigade was shaken and had to withdrawn, leaving the farmhouse dangerously exposed. 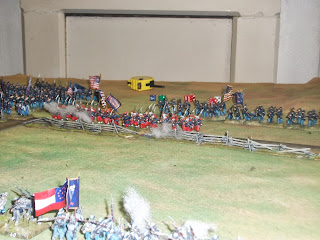 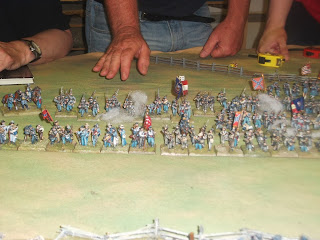 (Massed Confederate infantry assaults, wave after wave of them!) 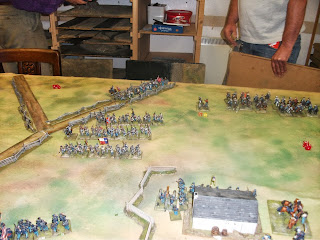 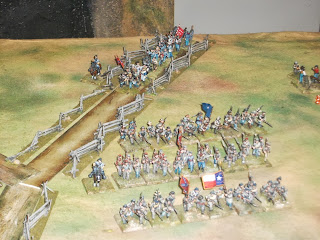 In the centre the Confederates threw in three successive attacks against the Federal positions. Each in turn was halted and thrown back in disorder, even when they used their guns up to point blank range. On their left the Confederates tried to throw the Federal cavalry out of the farmhouse, but were unable to dislodge them for three rounds of melee. They were able to survive their break tests for failing to break into the farm and loosing the melee for a while but on the last round they failed their test and were destroyed. 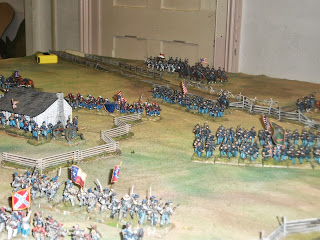 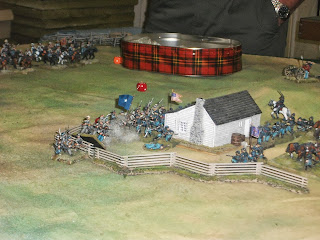 At the end of the game the Federal forces had held in the centre and the all important rod junction, had held the farmhouse and on the left were sweeping round the Confederate flank poised to roll up the line. A victory for the boys in blue.

Very good game. Everyone got the hang of  the rules eventually although a few things needed working through carefully to make sure everyone understood what and why, and I think we have a couple more converts. Next week I think we are trying out BP with an Austro-Prussian War of 1866 battle. Guaranteed to be interesting and a shame my 1866 Austrians and Prussians are still in the box of doom.
By Colin Ashton - August 09, 2013