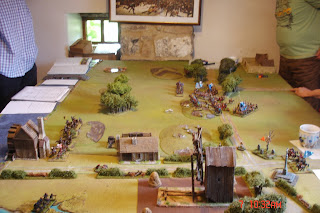 The guys came up on Sunday to play a Swedes v Poles game using Pike and Shotte. The scenario required the retreating Swedes to enter the battlefield across two bridges and capture the hills overlooking the river and crossing points, thus enabling the bulk of their army and its baggage train to continue their withdrawal into the relative safety of Livonia. We started the game with some units on table. The Swedes had a brigade of horse (including some commanded shot) and two units of dragoons on table, but when we threw to see where they had deployed, both had entered the table over the same bridge, leaving half of the battlefield potentially under the control of the Poles. The Poles were allowed a 'brigade' of Cossacks and Tartars, and a brigade of mercenary German infantry, supported by two heavy guns. The Poles threw well for the Cossacks' initial deployment and were able to send a screen of cavalry out all along the centreline of the table. The Germans were a bit slower but were at least on the table.

All reinforcements were to enter the game from randomly determined points, the Swedes across the bridges and Poles from any of the four roads entering the battlefield area. We then threw to see who was fighting who. John and I got the Swedes. Rob and Paul were very pleased to get the Poles as they were keen to play with the Polish Winged Hussars. As usual I will describe the action in each sector of the battlefield through to its conclusion, at least as well as I can remember it! 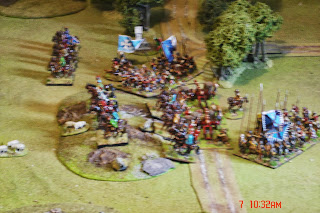 (Above: German mercenaries and artillery covered by Cossacks. Below: Swedish Blue brigade harried by Cossacks as they advance on the Polish centre) 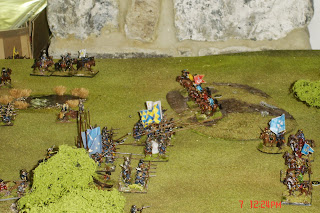 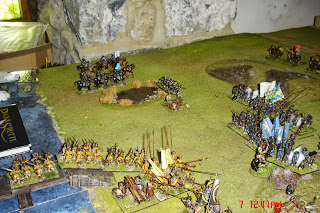 Above: Swedish Yellow brigade crossing the bridge of boats. Below: German and Polish infantry) 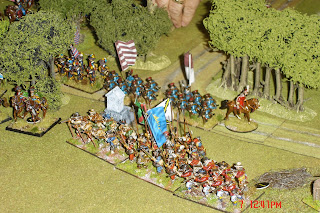 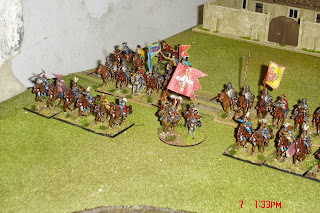 (Above: Pancerni and Cossacks rooted to the spot thanks to some poor command rolls from Rob. Below: Swedish cuirassiers and commanded shot) 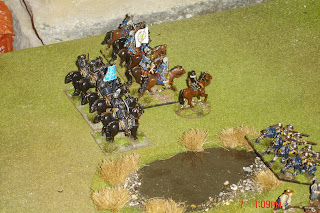 The Swedish left got off to a slow start, as in turn 2 when they should have arrived, the veteran Blue brigade failed its command roll so didn't  get onto the table until the following move, when they promptly blundered and took possession of the blunder dung heap for most of the rest of the game.  In the meantime the Poles were having trouble of their own as the Germans made slow progress and their planned reinforcement, a cavalry brigade of Hussars, Pancerni and Cossacks failed their command role and remained off table. Rob's Cossacks were taking pot shots at the Swedish deploying from the bridge and caused some damage but the Swedish Blue brigade eventually shook itself out into a line and began to move slowly forward, driving the Cossacks off and breaking/shaking enough squadrons to make the entire brigade shaken thanks to some excellent shooting by my commanded shot and Scots musketeers in the centre. The Polish cavalry eventually made it onto the table, with the Hussars heading for the centre while the Pancerni and Cossacks rode off to the Polish right flank where they stayed for the remainder of the battle, as by this time they were faced by two squadrons of Swedish cuirassiers, some commanded shot and elements of the 'Blue' brigade. The final Polish reinforcements (Haiduks, Krackow militia and a sledge gun) eventually arrived (more dud command throws) and were pushed along the road to plug the gap about to appear with the disappearance of the Germans. 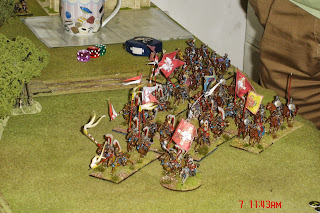 (Above: Rob's Hussars riding for the centre of the line. Below: Swedes on the move) 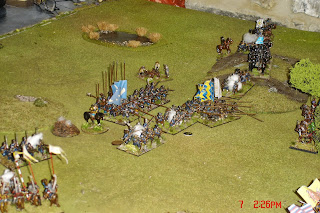 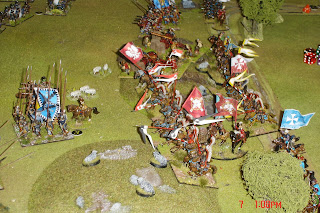 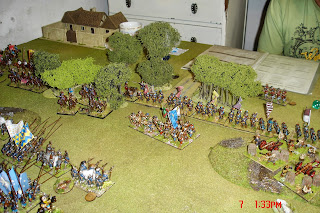 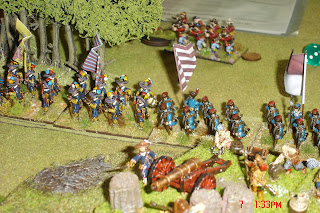 (With the disappearance of the Germans the Polish Haiduk infantry and Krackow militia are now the front line!!!)
In the centre, the Poles' German mercenaries deployed in two blocks, with their heavy guns taking up a position on a prominent hill between them. Cossacks advanced and skirmished with the Swedish dragoons and and the 'Scots' brigade. They had some success by causing disorder on one unit of dragoons and elements of the Scots but the other dragoons managed to deploy into the woods in the centre of the table. The 'Blue' brigade was in the meantime moving towards the Polish line although they were taking heavy casualties from the artillery positioned in the centre. They were winning the fire fight with the German mercenary regiment. The German pikes charged one of the Swedish musket wings but were amazingly held off while the Swedish pike charged home and drove off some German shot. With what was going on in the further along the line this resulted in the German brigade being broken as their other regiment had been engaged in heavy fighting with the Scots brigade, loosing their commander in the process. Meanwhile the Swedish 'Yellow' brigade had entered the table and was moving in support of my hard-pressed Scots. Rob launched his Winged Hussars at my line and rode over a gun and smashed a unit of shot, but were then caught between the fire of three units of Swedish shot and disordered. we had some trouble causing any actual losses on the Hussars with their save of 3+ but this unit at least was out of the action as Rob kept failing his elite status role to remove the disorder at the start of his move. Another of Rob's Hussar squadrons charged the front of the Swedish Lifeguard company but although they survived the closing fire were unable to win the melee so bounced. Amazing dice throwing all round! 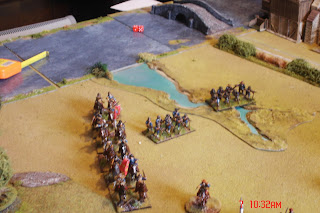 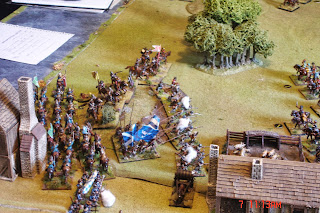 (Above: Swedish right, with the Scots brigade engaging Cossacks to their front, supported by dragoons. The Swedish horse are about to be ordered over to the far right flank due to the appearance of rather a lot of Polish cavalry) 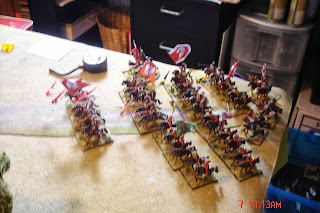 (Above: Paul's Hussars, Pancerni and Cossacks arrive, but not very swiftly and clash with the Swedish and Finnish horse on the far right) 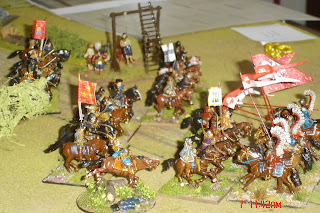 On the right, my brigade of horse dropped their commanded shot along the road and galloped round the windmill towards the Polish table edge and halted between the mill and a wood ready to engage any Poles entering the table on the road. They didn't have to wait long well they waited longer than they needed to as Paul threw some bad command dice and was slow in getting his cavalry onto the table). One of my squadrons of horse charged the lead Winged Hussar unit and fell short, only to be charged by their intended target in the next move. As expected, my horse were crushed by the infinitely superior Hussars and sent packing. What followed was a desperate delaying action by my cavalry and commanded shot until my other brigade of horse, which had just crossed the bridge, could come up in support. My first brigade of horse was slowly worn down by the Poles, to the point where only one squadron remained and it was shaken, a spent force. Thankfully, and much to the consternation of Paul, his command throws were dreadful all day, so it took him several moves to get within charge reach of my second brigade of horse, now positioned on one of the hills on the extreme right flank of the army. 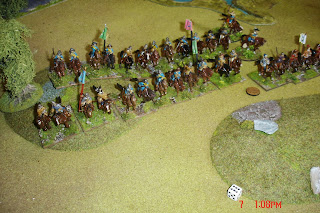 (Swedish reserve horse waiting for the feared Polish charge that never came!)
Paul was desperate to get his Hussars to charge so we agreed to play another move. He had positioned his cavalry perfectly. He threw his command dice. DOUBLE SIX!!!!!! What a time to blunder as his charge would have been almost impossible to stop and should have won the game for the Poles. As it was, his entire wing of cavalry was unable to move. The Swedish horse breathed a collective sigh of relief.

At that point we called it a day. The Swedish right had just about held on, thanks to Paul's dreadful command roles. In the centre the German mercenaries were in retreat, the guns were in disorder and the cavalry in no position to face off the Yellow and Blue brigades. On the left, the Poles were unable to get the drop on the Swedish cuirassiers who were content to sit tight on top of their hill.

Verdict: An excellent game enjoyed by all and a Swedish victory, just. Once the Swedes had their infantry deployed the Poles found it hard to counter them, especially their firepower, although in the early stages their Hussars proved to be more than a match for even the best Swedish and Finnish horse. Thanks to Rob, John and Paul for coming up and sorry about the sharp pikes. Hope you didn't loose too much blood Rob! Sorry if some of the photos are a bit blurred but that was due to the ground shaking as thousands of Polish cavalry thundered onto the battlefield, and my poor photo skills).
By Colin Ashton - August 20, 2013