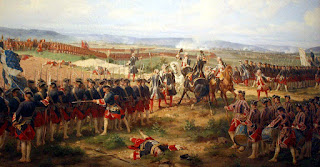 What with one thing and another it's been a while since my last game (it'll be well over a fortnight by the next one). Actually, its actually working out better for me not having a game every week, and planning for one or two a month does appear more sustainable health wise. I also have more time to do painting and other 'stuff' without it impinging on our weekly domestic schedule.

So, on Tuesday we shall be refighting Fontenoy using Paul's 15mm figures and Honours of War. Paul and I played this battle a year or two ago using Black Powder and although it was an enjoyable game (especially as the Allies- me - scraped a narrow victory) it was missing a certain 'something'. (We also played it back in the 1980's or maybe early '90s with his long gone 25mm armies oblivious to the fact  that we would be looked back on in time as Old School!).

It won't surprise anyone to be told that I do like Black Powder as a rules system, with certain caveats,  but one does need to avoid playing the rules rather than the period. Honours of War are not perfect either but have served us very well for our last few refights so we shall see what develops. Fontenoy is certainly a bit of a toughie for the Allies (nothing different there then) but victory is not outside of their grasp.

On other matters, arrangements are in place for attending Salute in April and Carronade in May, all subject to my health of course.
By Colin Ashton - March 27, 2017