In preparation for tomorrow's game....

As the title says, I have a game tomorrow with John the Red. Before continuing on that theme, while tidying up my paint station ( yes, honest!) I came across a little item that was begging to be used immediately so I retrieved the French Revolutionary War "Mon General" piece from the box and ripped all the figures off, added the newly found item and then put the figures back and added the usual Pva, sand, flock, tufts and so forth and there it was, and here it is. 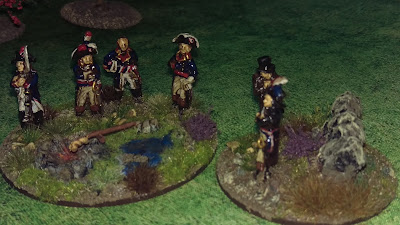 I think it's now a much improved vignette, and the representative from the Committee of Public Safety can still be used lurking just within earshot, only this time with his crony scribbling down the recipe!

So, the game. I'm thinking of doing the action at Altdorf during Suvarov's Swiss campaign. There are no cavalry in this one so my new Russians and French won't get a look in (even the Cossacks are dismounted) but I do get to field a brigade of Austrians in support of the Russian army. The Russians need to push the French back to the western bank of the Reuss Rover while the main body pushes on towards to Muotal valley and also prevent them from interfering with the supply train which had taken a different route through the mountains and was due to rendezvous at Altdorf, currently held by the French. The toughest half of the Russian army under Bagration (the grenadiers, jäger and more Cossacks) is not available in this action as they're part of the main body.

It's a fairly balanced game, as although the French are outnumbered they have the advantage of the terrain as well as slightly heavier artillery.