The Russian army in Switzerland update.

This neat little book was one of the things that got me to turning the idea of recreating Suvorov's Swiss campaigns into reality. I've read Duffy's excellent Eagles over the Alps cover to cover many times as well, and together with a few other sources and the availability of some lovely figures from Eureka, Trent and Elite, the die was cast and less than a year later I've been able to refight some of the engagements in the Alps between the retreating (ok, strategically withdrawing) Russian army and the encircling French. 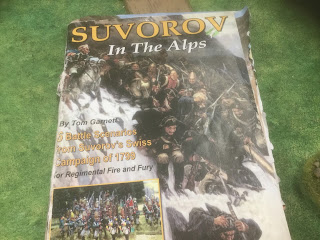 Although I've collected a rather large collection of Russians (14 battalions plus assorted stuff),  I probably (I.e. Definitely) need at least another Demi-brigade of French (and two of the existing ones need rounding out to full strength....). Even more scary are the Austrians, required for a couple of battles in Switzerland as well as North Italy if, er, when I decide to go that way. Plus, the Battle of Zurich is begging to be fought. Finally, I am dead keen to do the very obscure Anglo-Russian invasion of Holland. Amphibious landings and so forth.....(I've mentioned this before for sure, several times, and I am probably bonkers).

Assuming a I'm not carted off to the madhouse there will be more to come.