A quiet week or two

Nothing much has happened up the Dale these past couple of weeks. The planned game Saturday last didn't go ahead as I wasn't well, but I have recovered (or am recovering) from some nasty bug at last.....? I have nevertheless despite my malaise managed to get some more figures finished and based up, all of which will add to my growing French Revolutionary Wars project, in the shape of a few more Austrians and Russians. No photos of those just yet, but I also finished a couple of French vignette pieces. These are off my phone as I am still sans camera! 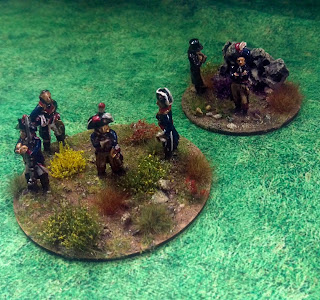 'Mon General' considering his options with his staff..... 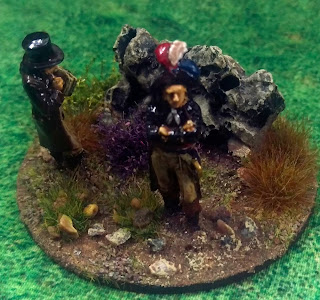 .....while a representative from the Directory of Public Safety eavesdrops in case the general displays any pro-aristo or counter revolutionary tendencies, and his assistant makes copious notes, which can always be altered later of course.

John the Red is coming up on Saturday for a game. Not sure what yet but I fancy rolling out the FRW collection again, with the new Austrians joining the Russians to face the French.

I seem to have developed two different strands for my FRW project. The original one was the Swiss campaign, and the possibility of refighting some of the battles in Northern Italy that immediately preceded it. The second is the 1799 Anglo-Russian invasion of the Netherlands. I picked up half a dozen English battalions at York and have farmed them out to be painted while I get on with finishing everything else off on the painting table, e.g. some more Cossacks and a battalion of Grenzers. I quite fancy doing the successful English amphibious assault at Calantsoog, and the engagements leading up to the Anglo-Russian defeat at Castricum. I've managed to find a fair bit of information about the campaign so we shall see. First of all I want to refight the Swiss campaign properly and do the Battle of Zurich as well.