Following on from yesterday’s theme, today is Towarzysze Friday.

I have to say I love this regiment and it’s antecedents the Bosniaks of Frederick the Great’s army. I have a unit of the latter which has rarely seen action to date, and my somewhat impetuous decision to start building in secret an1806 Prussian army a couple of years ago meant it was a no brainier to include at least a ‘squadron’ of the Towarzysze (or however one spell or pronounces it) regiment. (In my little men world my cavalry is organised into battlefield ‘squadrons’ of 12 figures, although perhaps a squadron should be represented by just six?) There are some smaller ones of just six figures; mainly historically small units of (normally) light cavalry or ones which might find themselves split up into penny packets. (Or I only had six figures left in the box and didn’t fancy buying another six....or eighteen?) 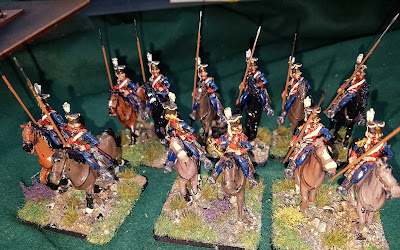 So here they are, the riders (Elite Miniatures)painted by my friend Barry of the Like a Stonewall Group, the horses and basing by me. The latter are from Elite Miniatures Collectors’ range but I have misplaced (lost) the separate reins so couldn’t make what may have been a half-hearted attempt to stick them on. Many of the reins on similar units have already fallen off due to even only moderate handling during games so maybe I have saved myself some time. I just need to do some lance pennons; I have some in the flag drawer that'll do nicely.
By Colin Ashton - March 30, 2018