"How I am filling up my new Man Cave" or "I need a bigger room!" 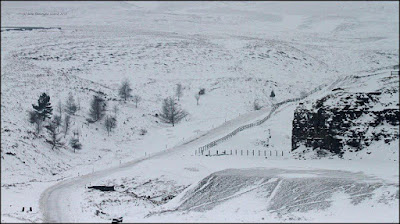 Well, thanks to the Siberian weather of the last week, to misquote Helmuth von Moltke "No house move survives first contact with the weather!" The removal men decided to come on Tuesday, a day early, to avoid the promised bad weather, only to have said bad weather also arrive a day early as well. Being hard 'Boro and 'Darlo' lads they got stuck in and actually managed to pack up about 75% of the house on three wagons and get out of the Dale before the snow closed the only road to civilisation. The following day saw even more snow so our stuff was delivered on Thursday. The 'stuff' included everything from the old Man Cave apart from my table which they couldn't 'walk' round to the back of the house due to deep snow drifts and the lads had not all brought their wellies like their mam's told them to.
After some careful unpacking over the weekend and checking for casualties (very few so far and those largely pikes and flagpoles and a few figures which were detached from their bases) I've already managed to fill the three big display cabinets with almost all of my 1672 and French Revolution collections. Other boxed up figures are now arranged in piles by period ready to go either under the long shelves but mainly under the table, when it arrives.

So as I write I have unpacked every box in the Man Cave. I'm not doing books yet but filling the new cabinets with figures and at least sorting the rest out into 'period piles' (sounds painful) feels like an achievement. All the houses and terrain items are also unpacked and at least some of the former and all of the latter have been put away. I'll feel better when/if my table arrives as much of what it cluttering the room belongs underneath it. Then I just need to think about my collection of hats and my paintings. And my ships.