In further preparation for my Zurich game I needed to paint a unit representing two squadrons of the 7th Hussars. Having lots of spare Perry plastics it was no problem to assemble and paint them in pretty short order, but then there are only six of them! The trumpeter in the Perry set is wrong for the FRW, so I used the legs of a hussar, the torso of a dragoon officer and the bicorne of an infantryman, with a spare sword arm and a Bicorne Miniatures metal trumpet slung across his back, so he is charging in, sword drawn, presumably having run out of puff and in realisation that a sabre might do more damage than a tin trumpet, no matter how badly played. Anyway, I rather like the way these have turned out, and will be even happier when I've added a few tufts to the bases and toned down the shininess a tad. I don't need more for the game but I am now tempted to do another half dozen. 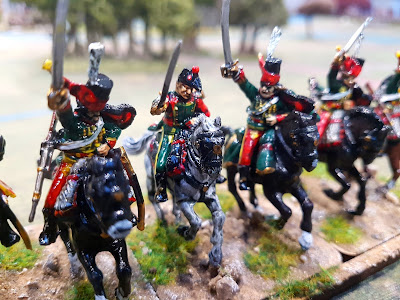