With the Guards in Flanders 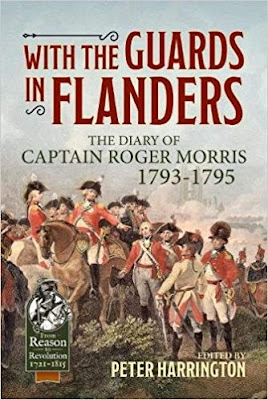 I was very kindly sent another book to review by the nice people at Helion and Co. I'm not normally a fan of republished contemporary diaries as they can often be bland and pretty heavy going. Not so this book, as it is delightful. The author was from a privileged background and did what many young men from privileged backgrounds did in the past and obtained a commission (at no inconsiderable expense) in the army. The Flanders campaign of 1793/95 was hardly one of Britain's greatest achievements militarily (think the Grand Old Duke of York marching his 10000 men up and down hills). It was a bungled exercise from start to finish, saved from an even worse end by the efforts of an underfunded and inexperienced army led in the main by competent amateurs like Morris. We get a candid day-by-day and quite matter-of-fact account of the campaign. Plenty of action, plenty of tedious picket duties, lots of useful snippets of information about troop movements and the wider campaign, frequent comments about the quality (or otherwise) of our allies, and loads of commentary one might otherwise expect to find in a travel guide. Morris's observations on the countryside, towns and villages and especially the churches shows us another side to the campaign and the man. The entries are at times humorous. They are also a product of the times and his class/status, e.g. in three sentences we get, in quick succession, a brief reference to the day's duties, the hanging of a deserter from the 14th Foot, and dining well with a general. Indeed the social side of campaigning does figure strongly in the diary, as also do his obvious love of churches and organ music (he was a competent organist), and he rarely lets the opportunity go by without playing wherever he can. In all an excellent and insightful little book, nicely illustrated and well referenced. As a postscript Morris was to serve under the Duke of York again during the ill-fated 1799 Helder Campaign, where as a Lieut. Colonel (already after just four years!) he would be killed at the head of a battalion of Guards' flank companies.
By Colin Ashton - October 04, 2018