The Secret Expedition, part 2, a review. 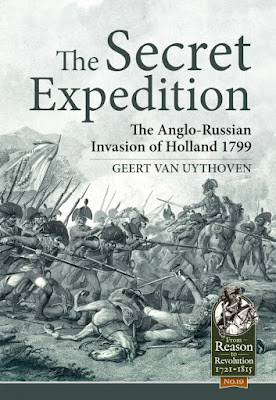 As promised here are my thoughts on this rather excellent book from Helion & Co.

The author states that this is something of a life's work, as he's spent several decades researching the subject. I believe he published an earlier version of the book in Dutch several years ago have to say that the author's depth of knowledge shows in the almost forensic detail found within the book. This is a campaign with which I am very familiar, and as well as reading everything I've been able to find on the campaign I've walked the battlefields to try and understand the issues facing both sides. Not surprisingly I've been waiting for the publication of this book for months. I am not disappointed. Its great! The build up to the landings is described in detail, as is the make up of each of the armies involved in the campaign.  Most helpful is that each of the battles are picked apart and presented step by step, supported by some very useful maps and orders of battle that make sense of some very confusing engagements. My understanding of the battles themselves is now much clearer than before. Every chapter is well referenced and filled with contemporary correspondence and diary excerpts to add a further dimension to the overall story. The book concludes with the close of the campaign and the evacuation of the Anglo-Russian army followed by a number of handy appendices detailing the composition of the forces involved, both on land and at sea. There is a comprehensive bibliography and a useful index of people involved in the campaign. As well as the maps the book is illustrated throughout. My only criticism is that all the maps and illustrations are in black and white. This is a little disappointing especially as the original contemporary paintings of, for example, the Battle of Castricum or the final withdrawal are of course in colour. I presume that this was to keep publication costs down. Overall, and excellent read and an impressive piece of work. You won't be surprised to learn that I shall be refighting this campaign in The Burrow, starting once I've got Battleground out of the way at the end of November.

I can't finish without reminding readers of the other recent and excellent publication on this obscure campaign, " A Waste of Blood and Treasure" by Philip Ball.
By Colin Ashton - October 12, 2018