Another regiment of Russian jager is ready to march off to Switzerland. These figures are from a Russian manufacturer, Gennady Stupin, who markets these and other 1799 Russians under the STP Miniatures banner. They are sold in sets of six different figures and look pretty good. They were painted by my mate Barry while I did the basing. 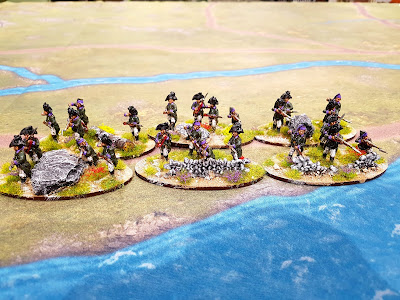 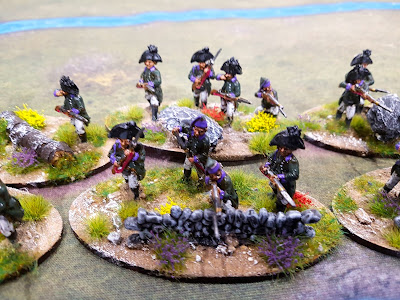 This link should get you to Gennady's blog. Prices are very reasonable. He also does Russian infantry and command sets and the figures are supplied with separate heads so you can chose from Musketeers in bicornes, Grenadiers in tall mitre caps or Fusiliers in short mitres. You will remember that Grenadier regiments had two battalions of fusiliers and two companies of grenadiers; the latter were stripped out to form a combined grenadier battalion with another pair of companies.

I have two musketeer battalions of the Nizov regiment in the basing queue which should be done over the weekend.
By Colin Ashton - October 05, 2018