Playing General d’Armee last week I realised that I didn’t have enough suitable English looking figures to act as ADCs for the Anglo-Hanoverians. With another game tomorrow I thought that was something I should rectify so dashed these off earlier this week in anticipation that they will be fully utilised. Why do I think they won’t all be required......?


I also found a bunch of resin FRW Russian gunners by STP Miniatures of St Petersburg. I don't have any need for another battery of Russian artillery for my Suvorov army (or indeed for The Helder) so had a quick browse through the library and decided to paint them up as Hanoverians. OK, they're not a perfect 100% fit but they don't have massively long pigtails (as worn by Russians of that era) so I think they do the job. I started these yesterday lunchtime and just finished the bases an hour ago so not bad. I've had to 'borrow' some cannon for the moment. The gunners came with three lovely resin cannon but theres only so much a mere mortal can do in such a short time. 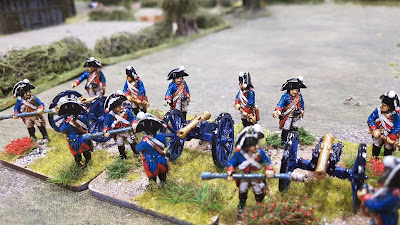 These chaps take the field tomorrow so fingers crossed they make it through the day, eh lads?