A game in the Burrow at last....sort of.

Later today (Saturday) I am hosting a game via Skype for the first time. My wife sorted out the technology, configuring our two tablets and a webcam to give the players a view of the proceedings.

The game is what might prove to be a pivotal confrontation in my French Revolutionary Wars campaign. It’s actually the fifth battle in just nine campaign days, so there’s been plenty of action so far. The Austrians have a division entrenched a few miles south of Courtrai on the east bank of the Lys. A little exposed, it is about to come under attack from a much larger force of revolting Revolutionary French. The Austrian Commander in Chief in Courtrai is aware of this and may well be trying to send reinforcements as it’s only a few miles quick marching away. Of course the French have planned for this and have a strong force of cavalry on the road between Courtrai and the isolated Austrians ready to interfere. Will the Austrian reinforcements get through, and will they get through in time?
The game will start with me having the answers to those questions as I’ve already played out that phase of the battle but have yet to share the outcome with the participants as there won’t have been chance for any communication between the off table commanders and the on table commanders before the start of the main battle. 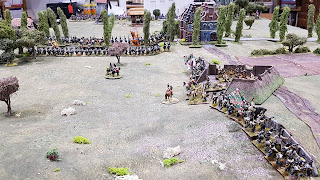 The centre of the L-shaped Austrian position. Plenty of entrenched artillery but only six battalions and no obvious sign of any cavalry. This was the division that failed to cross the river during the battle a few campaign days ago, suffering heavy losses among a couple of battalions. 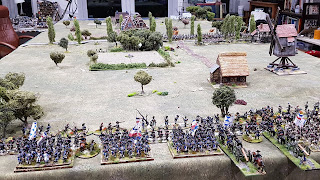 The eastern end of the table. This is where the initial French advance is expected to begin. The troops are not yet on the table but that is where they will be assuming they pass their orders. The southern edge is the way to Menin and probably where more French could appear. The northern edge is the route to Courtrai, where reinforcements could arrive if they’ve fought their way through any French blocking force, or not.......

Barring any technical hiccups kick off is at 10am. I’m looking forward to it, especially as I get to do my evil laugh at a few points during the game. I’m using Gen d’Armee so it'll also be an interesting experiment. With all such games there is an unquestioned assumption of honesty and integrity among the players as they will be rolling the dice and revealing the scores while I move their figures for them. I’ll also be in charge of the cameras.

I will of course give a full account of the game later today or tomorrow.