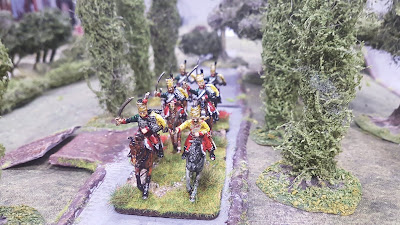 I found some ‘spare’ early Napoleonic Hussars in the box of doom so thought I would knock off a quick half dozen figure squadron of the Guides de l’Armee d’Allemagne from the French Revolutionary Wars as depicted in a Knotel print I’ve seen. This was a short lived (they were subsumed into one of the regular hussar regiments ) and small unit but one with a good bit of dress sense when it came to their uniforms. Very bright. These are actually Eagle Figures Spanish Hussars but mirletons and breaches and a paint job and hey presto. I reckoned General Houchard in my FRW Flanders campaign needed a squadron of Guides so What better motivation than that. I’ve been struggling with painting these past few days but they’ll do. 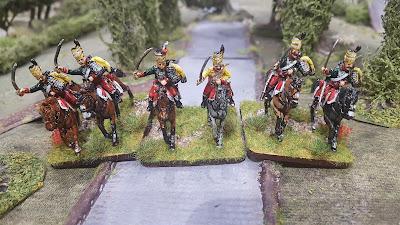