When this package arrived today my usual comment of "I have absolutely no idea what it could be " was entirely true. I'd completely forgotten that way back whenever I'd pre-ordered a box as I thought I could use them to expand my Sikh Wars collection into Afghanistan proper as well as for the 2nd Sikh War. 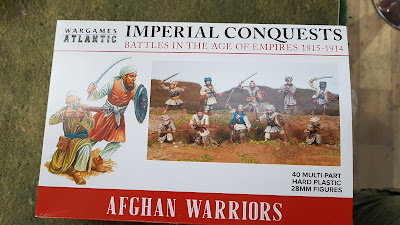 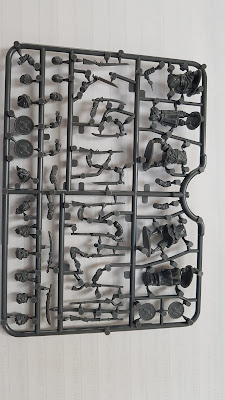 First impressions based on the box art were good. The option to make 40 figures was and is a big attraction even if I have moved on from 1840s India, for the present.......

Once inside the box, there are eight identical hard plastic sprues, each with five legs and torsos cast as a single piece. Each sprue  also has 13 different heads and enough pairs of arms and weapons to arm each tribesman with either a jezail, a Martini Henry or sword and shield. So, 40 men with jezail, 40 with Martini Henry, 40 swordsmen, or any combination thereof. Unless I’ve missed them, the only absentees I would comment on is an option for command figures, but that’s not a weakness of the set at all in my opinion as it suits my needs. It is providing a cheap way of bulking up my existing forces and I probably have some spare chieftains and flag bearers in my bits box to recruit.

I’ve not had the chance to stick any of the figures together yet due to commitments in other periods at the moment but I’m sure I shall see a return to to the Indian sub-continent by the end of the summer.

Overall then, although I’m not a fan of hard plastic figures that require assembling if only because I normally have better things to do with my time than sticking my fingers together, I do think these are an excellent set. Now, I wonder what the Perry set will be like?
By Colin Ashton - May 28, 2020