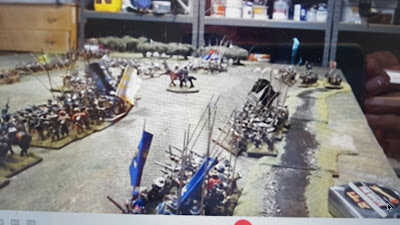 Last Saturday Steve kindly hosted another Thirty Years War game via Skype, this time the Battle of Wittstock on 4 October 1636.  The Swedes, commanded by a Scotsman and most of the army 'British' or German faced a roughly equal force of Imperialists. Both sides had only a portion of their troops on the table, but the difference was that the Swedes would be bringing troops on both short edges of the table on T2 and T4, exactly where dictated by rolling command dice each turn.

I only took a couple of photos of the game sadly as I was far too engrossed in the proceedings, especially when my flanking force of cavalry rolled up the Imperialist line from their right, and just in time too as our right and centre were beginning to crumble. 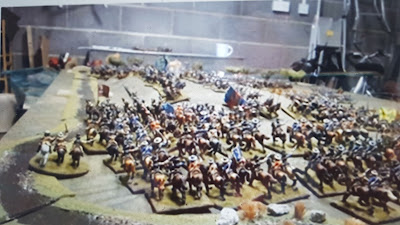 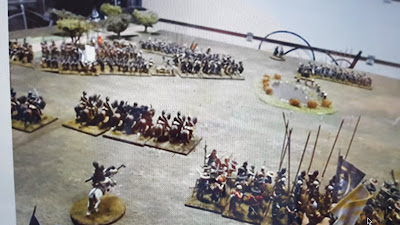 It was a really good game and well done again Steve for organising it and doing all the hard work. We all agreed that Pike and Shot as a rule set for the TYW are pretty rubbish, for a list of reasons far to long to bother anyone with here. That said, it was still as I said a great game and a most excellent way to spend time with fellow wargaming friends in this time of crisis.

We are convening again next Saturday for another TYW battle, which I am looking forwards to very much.