It seems like ages since my previous post on 7 May. I’ve hardly been inactive as I’ve played, via Skype, three games, all of which were good fun and welcome distractions to the current situation. I didn’t feel much like blogging about the games as the quality of the photos I took of the images on my computer screen were pretty average and I was far too engrossed in the games to remember much of what was happening. Good old fog of war. It’s actually quite good (not) having a drone’s-eye view of the tabletop. Is there anyone hiding behind that forest? Better send some men to find out the old fashioned way. 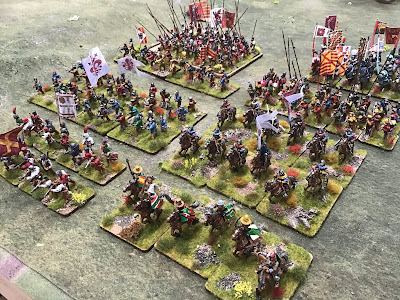 In terms of painting, after so many weeks of being housebound I suppose something had to happen. I’ve been very active dabbing and daubing away for half an hour or so two or three, even four times a day, and some of the fruits of this far from frenzied activity have been seen on this blog recently. Well, here is something totally different. With help from my mate Barry I’ve finally got stuck in to my long-stalled Italian Wars project, and it’s already shown signs of growing into an uncontrolled beast! It helps that I already have a fair few painted from around eight years ago when I became inspired by my mates’ Robbie Rodiss and Jim Sweeny’s collections which I played with in the flesh, and that of Jim Roach that I admired from afar.

The majority of the figures are from The Assault Group, with a fair number from the Perry twins. I have more of both these manufacturers figures to do, plus some venerable Hinchliffe and Old Glory castings. All the flags are from Pete’s Flags. A big thanks to Barry for helping me kick start this project. The PLAN is to have modest (ish) forces from Venice, the Papacy, Spain/Naples and French. And anything else that takes my fancy. Another good reason to be pleased today is that I’ve found enough space to store some more boxes in my man cave so they’ll all have a home.
By Colin Ashton - May 17, 2020