This week's game was going to be a bit of a nostalgic trip back to perhaps three years ago when I last fielded the Crimean War collection in a fictional encounter to the North East of Sebastopol. I also thought I'd put together some amendments so we could use the mechanics found within Honours of War. The Crimean collection is another  one of those that was exciting to put plan and together, and which visually, though I say so myself, looks stunning and evokes a few memories of Tony Richardson's iconic and very anti-war 1967 Charge of the Light Brigade movie (oh whatever happened to all those cut scenes, like the charge of the Heavy Brigade? Criminal). 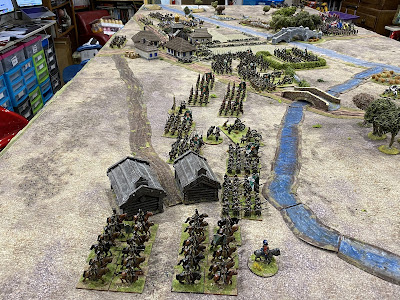 Anyway, it is August 1854 and the Russians have sent the VIth Corps to capture a large British supply shipment which had been 'abandoned' due to incompetence and/or corruption in the village of Storye Cheri. Lord Raglan has ordered Lord Lucan to take the Light Brigade of cavalry and the 1st and 4th Divisions to ensure the damned French, er Russians don't sneak off with their loot and leave the army in even more dire straits than they would normally find themselves on campaign.

Orders to Lord Lucan
Due to a staff cock up, i.e. corruption, our supplies were mysteriously taken to the abandoned village of Storye Cheri to the North East of Sevastopol. These supplies include new siege guns, powder and shot, officers’ personal consignments of food and clothing from the finest London establishments, oh, and a few blankets and greatcoats for the men. There might even be some food suitable for the rank and file as well.

You must cross the Gryazukha River, retake the village and drive off the Russian forces before they are able to remove the stores, which they MUST NOT be permitted to do. The 1st Division is the finest in the army, armed with Minee rifles. The 4th Division are still armed with smooth bore Brown Bess muskets (except the Rifle Brigade who have Minée rifles). Half of the entire mounted complement of the army was roused to go on this expedition and you have a cavalry brigades of five weak regiments under your brother in law Lord Cardigan. The only artillery available to join this force is a battery of 9pdrs with each division and a battery of 6pdr horse artillery attached to your cavalry.

Further troops have been ordered to support your attack. Nobody is quite sure which if any will be available to march to your assistance, just hope its not Johnny Turk or those damnable Frenchies!)

Russian Orders: Having by prior arrangement with corrupt enemy commissary officers ‘overrun’ and captured the English supplies abandoned at Storye Cheri during the night, your task is to hold the ground for 6 turns to allow sufficient wagons to come up and remove the stores. They will take 1 D3+1 turns to load up. You may then withdraw if necessary after holding for another 2 moves to allow the wagons to get away.

Dawn breaks and passes, as does noon, and it only in the late afternoon that Lucan arrives in sight of the Russians who have adopted a strong defensive position along the loop of the River Gryazukha and in the village. One of the difficulties of the Crimean War is trying to balance the superiority of British musketry (mostly armed with Minée-type rifles muskets) against the stoicism of the Russian infantry and their rather impressive number of large batteries attached to the corps. (There are two twelve gun batteries of 12pdrs as Corps reserve, two twelve gun batteries of 8pdrs, one per division, and an eighteen gun battery of Don Cossack horse artillery.) I think I got it right and this seems to be evidenced by the way the game turned out.
Mark, John and Conrad played the Russians while Neil, Paul and Shaun played the British, managed to get the Ottoman brigade as their random reinforcements, but at least they arrived in turn 2. What follows are some photos of the game which hopefully will help explain how the game played out. 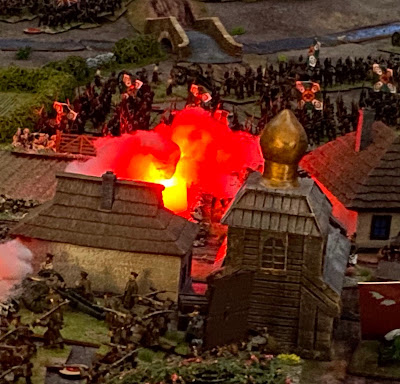