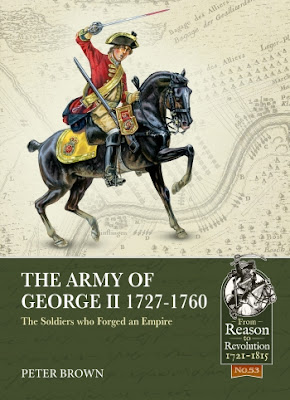 The Army of George II 1727-1760 by Peter Brown is the 53rd publication in Helion’s ‘From Reason to Revolution’ series. I will cut to the chase and say that I found this book to be an immensely readable and informative study of a fascinating period in the development and history of the British army. I positively galloped through it into the early hours, well beyond ‘silly o’clock’.

The book is presented in the well tried structure of the majority of Helion publications in this and many other series, and, following the introduction covers every aspect of the Army, from, for example, recruitment and training of the common soldiers, discipline, the officers, each arm of service, medical services, colours and standards and so forth. All liberally dotted with a fine array of contemporary black and white illustrations and excepts from letters and journals. In fact the use of such excepts really brings the subject, and the writers, to life. In my usual ghoulish way I found the chapters on medical services, the experience of battle and the ‘Butcher’s Bill’ especially interesting and enlightening and as ever it amazes me what officers and men endured when on campaign, in battle and it’s aftermath. The chapters covering overseas service, in North America, India and other locations as far afield as Senegal and the Caribbean provide a useful insight into what was very unpopular and hazardous (from sickness especially) service abroad, and how the army adapted to the rigours of campaigning in the forests of North America to the dusty plains of India.

The book finishes with appendices dedicated to details of regiments raised during the Seven Years War and the uniforms of infantry, horse, dragoons and American Provincials.

As with pretty much every Helion publication we are of course treated to some gorgeous colour illustrations in the shape of nine pages of paintings by Patrice Courcelle and a further seven colour pages of re-enactors in period costume.

Overall then an excellent book and a must for anyone interested in the British army of this era. I have a small British contingent for my War of the Austrian Succession/ Seven Years War collection that has yet to march out of barracks and see service. Maybe this book will be the kick up the backside I need to remedy that!
By Colin Ashton - November 24, 2020