The Lion from the North volume 2 reviewed. 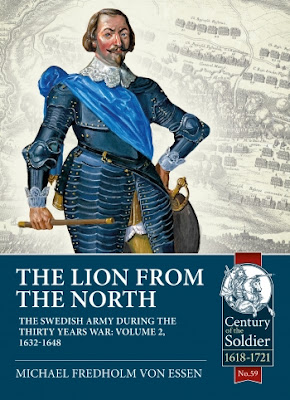 Number 59 in Helion’s ground-breaking series ‘Century of the Soldier’ is ‘The Lion from the North, the Swedish Army during the Thirty Years War: Volume 2, 1632-1648’. I’ve been waiting (not very) patiently for the arrival of this book, by Michael Fredholm Von Essen, for what seems like a long time. Pretty much everything I’ve read about the war stops shortly after the Swedish victory and Gustavus Adolfo’s’ demise at Luthen in 1632, so it is an understatement to say that is a most welcome addition. I’m not going to regurgitate the contents page, suffice to say that the author provides us with a scholarly analysis of the development of the Swedish army under the genius administration of Chancellor Axel Oxenstierna and the military skills of his Field Marshals. This excellent book is the result of a significant amount of research judging by the impressive array of contemporary and later sources listed at its conclusion.

Well written, impressively detailed, lavishly illustrated, with 32 colour pages showing Swedish uniforms, flags and a lovely map of ‘Germany’ and the various ‘circles’ during the period covered, this book opens up a whole new area of research in the post-Lutzen Swedish army which hitherto, to my knowledge at least, has been largely overlooked in the English language.

Not only do we get an account of operations leading up to the Peace of Westphalia in 1648, but we get, as one would expect, an informed description of the Swedish army and how it was raised, maintained, armed and organised as well as pen pictures of each of its main commanders. As a bonus there are chapters on the war against Denmark, the development of the navy and a fascinating insight into the ultimately doomed Swedish attempts at setting up and maintaining  colonies in North America and West Africa.

The publisher, editor and the author are to be commended on producing such a fascinating and engaging book. The result is no less than outstanding for anyone interested in the Thirty Years War.