War of the Polish Succession and a disguised wargame scenario

On Saturday I hosted another remote wargame at The Burrow. The set up can be seen in the previous post Here . Particularly astute readers will have recognised the scenario as a disguised refight of the Battle of Rossbach on 5 November 1757, (so played almost on the anniversary) but shifted 25 years backwards, a few hundred miles south and with a largely whole new cast. In this game the Austrians took the place of Frederick’s Prussians while the Spanish morphed into the Reichsarmee. The French of course stayed French. We had a reduced lineup due to work commitments and the pandemic, but Conrad and Neil played the Austrians while Paul, Richard and Mark were the French/Spanish. I don’t think anyone other than Mark recognised the actual battle before I mentioned it at the start so well done. I’ve refought this battle at least twice I think. Once at the Battleground 2015 show and once at home when we lived up the Dale. On both occasions the Prussians won, but only just in one case, and not decisively in the other. It’s a difficult one to get right and still remain a playable game for the French and Co. I think I created a balanced game. In this refight  the French could react to the Austrian cavalry onslaught if a little luck were to be on their side, while the Austrians would have to be planning several moves in advance if they were to overwhelm the enemy and not allow their cavalry to get ground down too much to remain effective in the later stages of the game.

The Austrians won the initiative, which was vital if their plans were to work. Note that the Austrians were not turned into proto-Prussians but still retained their own national traits as outlined in Honours of War, so only their grenadiers and cavalry were classed as superior. I decided that their artillery should be standard rather than superior because (a) they represented Prussians and (b) superior artillery is very effective in the rules, maybe too much so. The French and Spanish were a mixture of superior, such as the Guards and Swiss/Irish battalions plus the Royal Carabiners. The Spanish were inferior except for their guard and foreign battalions whom I made standard. Spanish horse and French dragoon’s were rated inferior. So, on to battle. 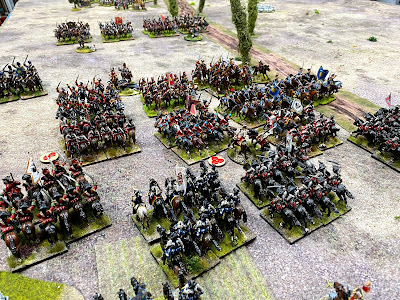 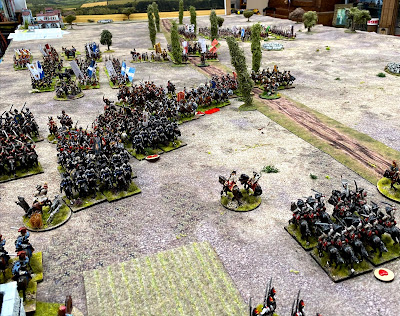 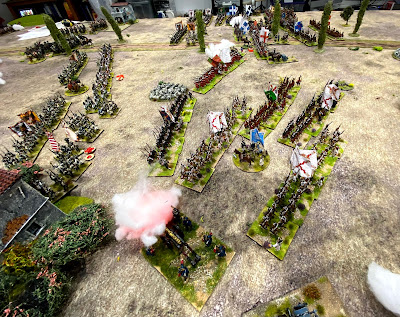 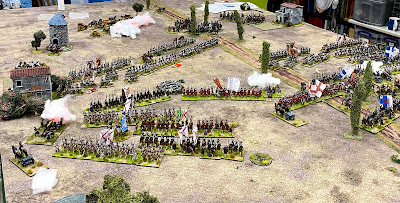 So at the end of Turn 14 the game came to an end, with neither side holding a significant advantage. The Austrians did well in holding off the Austrian horse, and in the final turn had broken two battalions of Austrian infantry, one by the Spanish infantry and close range artillery, the other by the French Guards. It is interesting to speculate on what would have happened if we'd been able to finish the game to a definite decision. The Austrians still had four regiments of cuirassiers and one of hussars left, with barely a scratch on any of them. By comparison the Allied cavalry had been reduced to three regiments, two French and one Spanish. The infantry had barely begun to fight so the early loss of two Austrian battalions was a critical one, but if pressure could have been maintained along the line, especially against the somewhat flakey and unsupported Spanish, then perhaps the French on the right would begin to suffer for being so congested if they were forced to retreat. Who knows? I enjoyed setting up and running this game, and am being pulled back into the 18thC, so much so that I've started painting another battalion of French, and finished basing up another two battalions of Frenchmen.

Hindsight being such a wonderful thing, had I been playing on the French side I think I'd have sacrificed the leading cavalry brigade to delay the Austrians and pulled the others back onto the advancing infantry, well outside of the the range of the Austrian artillery. The infantry could then have stood firm or led the way in a slow and limited advance, where superior numbers rather than quality might well have prevailed. On the Austrian side, I've played them (as far better Prussians) twice and fallen into the same trap on both occasions. Easy to say, especially as I've failed to do it myself previously, but the Austrians have got to avoid mutually assured destruction with their cavalry. Their artillery would I feel be better used limbering and advancing with the infantry given that they lost three moves of shooting whilst being marched through by 5000 sweaty blokes from the far corners of the Empire. Whatever. Anyway, it was a great game and everyone enjoyed themselves and yet again the technology (at least as it scooted into the ether from the Burrow) worked well, although I think one or two players suffered occasional buffering problems intermittently through the game.

Another Saturday of gaming over, I was planning on a session with the Virtual Wargames Group but I gave up after about half an hour as I needed to have a lie down.  Next Saturday, another game I hope. Not sure what yet, but plenty of time to decide.