Saarbruck to Sedan by Ralph Weaver. 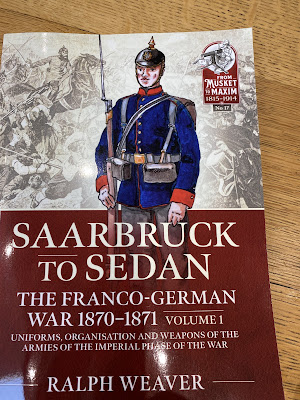 I’ve been a follower of Ralph Weaver’s work with the Continental Wars Society for more years than I would wish to remember, so when Helion announced that they were to publish his new book Saabruck to Sedan, the Franco-German War 1870-71, I was quietly excited. Volume 1 (this is to be a series) looks at the uniforms, organisation and weapons of all the armies engaged during the short ‘Imperial’ phase of the war. The book claims to be the first to look solely at the armies themselves, how they were dressed, organised, supplied and equipped, rather than giving us yet another potted history of the demise of the French Second Empire after a series of disastrous battles and the capitulation of Sedan. This focus is good, as another book on the battles of the campaign would probably just be a regurgitation of the same old stuff available elsewhere in numerous other publications, whereas what we have is a precisely detailed investigation of the multitude of uniforms worn during the campaign, both on and off the battlefield.

The book also highlights the widely different approaches adopted to clothing and supplying soldiers in the French (centrally produced by government contractors) and Prussian (the responsibility of a unit’s depot company/squadron) armies, and advances in the development of armaments on both sides are also discussed.
The author has consulted a wide range of recently published references as well as many contemporary accounts, official publications, private letters and memoirs, together with accounts of what the foreign English language press of the time had to say about the conduct of the war.

The book is broken down into comprehensive sections on the armies of France, Prussia, the North German Confederation, Southern Germany and, interestingly, the various neutral states on the peripheries of the war. These sections are well written, very detailed, looking at each and every different type of infantry, cavalry or artillery unit found in each army, in some ways pleasantly reminiscent (but significantly more detailed) of the series of articles in Airfix magazine from the late 1960’s/early 1970’s.
The book contains numerous contemporary black and white illustrations and 20 pages of colour plates specially commissioned for the book, showing a range of uniforms, including some rather less than mainstream such as the French remount service and the Prussian postal and medical services.

Overall, this is an excellent book. Unlike many recently published works available on the uniforms of thewar, the focus is on providing good solid information rather than the expensive portrayal of each and every uniform worn. There’s a welcome place for that kind of book, just as there’s an equally important place for a book such as this where the focus is on the detail. I look forward to the next volume in the series.
Thankfully, I won’t be rushing out to buy some more figures as I have more than I can comfortably use at once as it is. Well, I might do an ambulance or two, and a few vignettes; you can never have enough of those.
By Colin Ashton - February 07, 2022