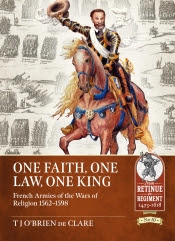 Things have been a bit subdued here in the Burrow over the last couple of weeks, no games, not much painting but plenty of reading. So here’s my take on one of Helion’s latest offerings.
What a fascinating and interesting book on a subject I didn’t know a great deal about in any detail. I’ve always believed that the French Wars of Religion were an incredibly bloody and complicated era and can honestly say that this book has proved to be very enlightening and me to be right! I now at least understand much better what lay behind the wars, as well as having an insight into the politics and of course the armies involved and the battles they fought. This is a refreshing new take on the Wars and the publishers are to be commended yet again for making such a wealth of information on an often overlooked conflict available to a wider audience.
The book is No. 10 in Helion’s ‘From Retinue to Regiment’ series, written by T.J. O’Brien de Clare whomI’ve not come across before. The first part gives us a comprehensive summary of the wars and major battles, accompanied by several newly researched maps which are particularly well done. We then get sections, equally detailed, on the commanders, the armies and the soldiers; what they wore, how they were armed and armoured, their flags, training, organisation and changes in military doctrines as the Wars progressed, all of which makes fascinating reading. The military biographies of no less than 43 commanders are very helpful in placing their actions within the context of the Wars. The author makes some interesting and new conclusions on the impact of the Wars on warfare in Europe during the later sixteenth and early seventeenth centuries.

The book is packed full of black and white illustrations, many of them contemporary, and a large number of pen and ink drawings by the author of different types of troops found in the armies during the Wars., and the central colour plates, again by the author, give yet more examples of dress as well as a large number of flags.

The use of ‘Middle’ French terminology for many of the technical aspects threw me to start with but the reasoning behind it’s use is explained at the start and aided by a useful glossary at the end of the book, and it all makes perfect sense and adds to the narrative. Without doubt an excellent book on an often neglected period, and as a wargamer I shall have to resist the urge to add to my collection.
By Colin Ashton - February 27, 2022