I started on this project just before Christmas 2021 and our first game took place last Friday. First of all.  I am not oblivious to the potential for drawing parallels with some aspects of the Winter War and Putin’s invasion of Ukraine - small highly motivated army defending their country versus hugely superior numbers of Russians intent on rescuing the Finnish oppressed proletariat from their capitalist overlords, with more men, tanks, planes, well everything. The initial Soviet assaults were poorly planned and executed and it wasn't until they'd suffered significant losses that they changed their approach and began to make headway against the Finns using their overwhelming superiority in EVERYTHING..

On Friday (1 April!) battle commenced with an overwhelming Soviet assault on a lightly defended section of the Mannerheim Line. The terrain was essentially totally covered in woods and areas of frozen ponds and lakes. There were a couple of villages and we had a few areas of ‘dodgy’ ground, indicating either deep snow or frozen pond/lake. The latter were marked with large white areas of card with the warning to be careful going across them. About half the forest and rough ground areas were mine, and the rest were provided by my good mate Tim from the 'Like a Stone Wall' club. For this game we used Iron Cross from Great Escape Games with suitable Winter War mods and some campaign-specific random event cards. Fellow 'Like A Stonewallers' Barry, Bruce, Richard and Togs joined our Richard (P) Steve and myself for the game. I was the Finnish CinC, aided by Richard and Barry, while Bruce led the Soviet masses assisted by Togs, Richard P and Steve. We the Finns had a bunker on the left flank, some minefields strewn out front and a line of entrenchments in the centre which I forgot to put on the table but as the Soviets didn't get anywhere near it I suppose that's ok. The Soviet aim was to capture the exit points for the roads and/or tracks leading off the table behind the Finnish deployment area.

What followed was an incredibly tense game, lots of action but not always a great deal to see. Much of the tension came from the far from united Soviet command, who had different views about making a speedy and overwhelming attack at once.....or not. Anyway, here are some photos that hopefully give an indication of the course of the game, but not necessarily in the right order! 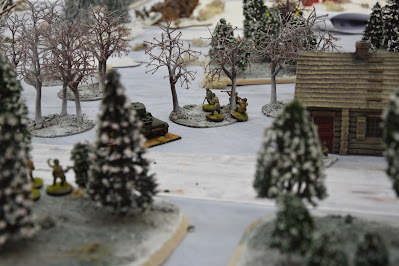 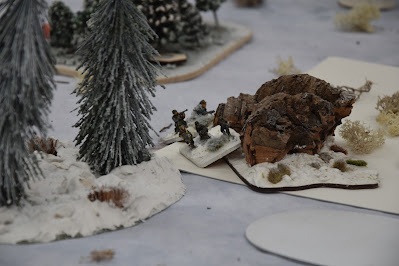 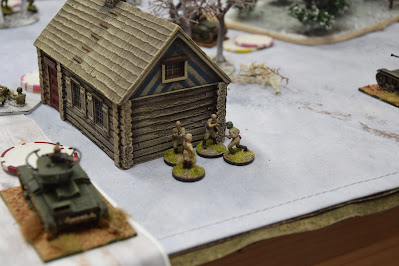 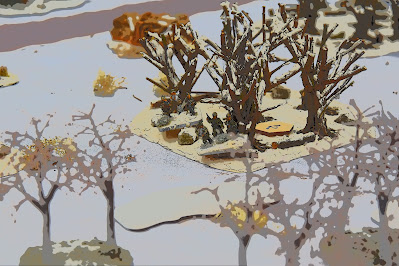 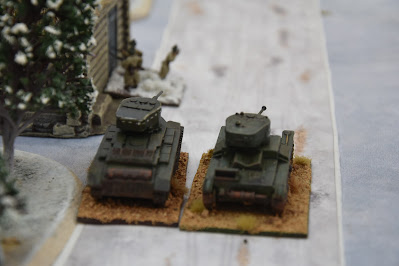 What an excellent game. The Finns lost the battle (BUT ONLY JUST) as the Soviets had captured two roads on turn six. This was a six-turn scenario with the chance of a seventh, but the random event card drawn in the last turn resulted in a snowstorm descending on the battlefield. The Finns opted to retire under cover of the weather. Finnish losses were light with just a few sections of infantry and a couple of AT guns and  HMGs lost, while the Soviets lost a good half dozen tanks, one armoured car and a fair few infantry squads. The Soviets also lost their CinC when the tank he was riding in ran over a random mine and blew up. It was fun watching the Soviets bicker on occasion about their tactics. If they'd stormed forward with their infantry from the outset they'd have forced the Finns to expose themselves to retaliation from artillery and tanks. But that never happened.

I  need to make some more winter terrain at some point but I enjoyed the game  and the rules a really good.