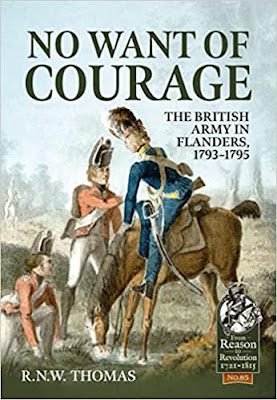 Another book review. What a splendid addition to the ‘From Reason to Revolution’ series from Helion. Over the last couple of years we have certainly not wanted for books on the Allied Flanders campaign during the War of the First Coalition either (not to mention two cracking books on the Helder Expedition of 1799).
As someone with a real fascination in the War of the First Coalition ‘No Want of Courage’ is another gem from Helion and the ‘From Reason to Revolution’ series, number 85 no less! Where other recent books on the period have largely been focussed on a narrative of the campaign, the author here has concentrated on the administration of a British army in the field in the late eighteenth century. Essentially how did it work, what were its strengths and weaknesses? With that in mind, we are given a detailed account of the campaign with all its triumphs and disasters which sets the scene and puts everything in context for the following chapters, which provide a fascinating insight into the operations of all elements that made up the army on campaign. These are the staff, the commissary at, medical services, the regiments, and the ordnance, where the not always especially effective relationship between the Army proper and the Board of Ordnance is discussed. The chapter covering the regiments can be further divided into the restructuring that took place in 1783 following the American war, the administration of the army, training and conditions of service, mobilisation, recruitment, the infantry and cavalry regiments on campaign, and the role of women within each regiment. There is a particularly interesting section on the earlier mobilisations of 1787 and 1790, of which the former turned out to be a complete failure and the second less so as lessons were learnt and applied then put to the test.

I also found myself drawn to the section discussing unit effectiveness in the field, where battalions brought up to strength with large numbers of recruits were sent to Flanders and judged to be totally unfit for service, a situation repeated many times before and since, for example Holland in 1799. Several hundred men were even sent back home they were of so little use!

The book concludes with several interesting and useful appendices covering such topics as strength and casualty returns, magazine states and march discipline. There is also a section covering the siege of Valenciennes and details of the train of artillery attending the British army in the Low Countries. Not counting the regimental artillery the army does not seem to have been especially well off for heavier cannon in significant numbers, which comes as no surprise.

The book is well written and illustrated with a large number of colour and black and white contemporary images and several well-drawn maps including one of the siege of Valenciennes and the surrounding area which is the best I’ve seen.

If you have an interest in the British army or the French Revolutionary Wars, whether as a historian or a wargamer, then this book should certainly be one to add to your collection.  I am also keen to get back to gaming the campaign as soon as practicable. I have a few thousand figures that need to get on the table as it’s been well over as year since they were last out.
By Colin Ashton - April 23, 2022