I've been very lucky to be sent another couple of books from Helion to review. In the absence of any games and not finishing much of note here's my thoughts on the latest. 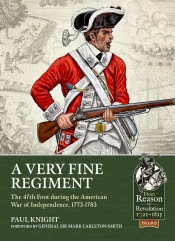 As a Lancastrian born and bred I do of course agree that HM 47th Foot (Lancashire) as they were then, is and was a very fine regiment indeed.

This fascinating book is yet another from Helion focussing on the American Revolution and traces the history of this one regiment throughout its campaigns during the entirety of the from war in almost forensic detail. The author provides us with invaluable insights into soldiering in Ireland and then America, from the early days in and around Boston, to operations along the Canadian border and the disaster that was Saratoga where much of the regiment became prisoners of war. Those fortunate not to be with the main army remained on the Canadian border for the rest of the conflict. If I were to chose, I’d say that the chapters on The Convention Army and that covering the three detached companies that were not present at Saratoga and who continued operations along the Great Lakes for the remainder of the war provided a lot of fascinating information that was new to me.

The author makes great use of contemporary sources, with correspondence and quotations which I always find myself drawn to. The book is well illustrated with a good number of really useful and clear maps, lots of contemporary black and white images and numerous tables. There are of course eight pages of colour illustrations. One is an original specially commissioned for the book, while the rest are a mixture of contemporary images and pictures of modern-day re-enactors dressed in a range of different uniforms and these are nicely done.

There are three appendices, the last one reproducing the rather interesting ‘Articles of the Convention’ between Generals Burgoyne and Gates following the Saratoga debacle.

‘A Very Fine Regiment. The 47th Foot during the American War of Independence, 1773-1783’ by Paul Knight is No.83 in Helion’s From Reason to Revolution series, and is a must for anyone with an interest in this conflict, whether a passing or a serious one, and would be worthy of a place on their book shelves (and mine).
By Colin Ashton - April 13, 2022