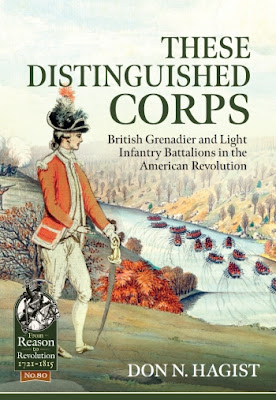 ‘These Distinguished Corps’ is one of those books that set me wondering why this subject hasn’t been tackled before. The British army in the eighteenth century was forever forming composite battalions from detached flank (grenadier and light) companies, often operating completely separate from their parent battalions, often in different theatres of war entirely.

This book by Don Hagist seeks to analyse the formation and operations of these elite units during the course of the American Revolution. It takes us through the campaigns in North America and the West Indies from the perspective of the ‘flank’ battalions and presents us with a narrative full of detail as well as action. The use of primary sources allows us to understand the lives of individuals within these formations, who they were, where they served, and their fate. For me this is a wonderful opportunity for anyone interested in the lives of the ordinary soldiers as recorded in their service records, and presents much that is new.

Extensively researched, well written and illustrated throughout with contemporary colour and lack and white illustrations. The eight pages of colour plates in the centre of the book are a mixture of contemporary prints and photos of re-enactors in action, and are well chosen.

No. 80 in Helion’s admirable ‘From Reason to Revolution’ series is a must for anyone interested in these key formations of the British army during the breadth of the American Revolution. Bad news is that I'm now beginning to wish I'd not sold my 28mm AWI collection about seven years ago, but they went to a good home and showed a good return financially so I can't complain. Ive recently some across some .stl files for 3D printing a load of AWI and FIW figures. Tempting.........