And now we go over to the velodrome 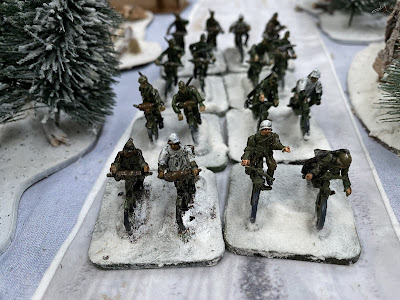 At the time of the Winter War of 1939/1940 the Finns equipped their elite jäger battalions and other recce troops with bicycles (swapped for skis when dictated by the weather). Each company also had a section on bikes for messages and the like.

These are probably more use if I extend my options and start playing the Continuation War but I’m not contemplating that yet!  The figures are a mixture of HaT and Streletz WW2 German cyclists so only needed a paint job to turn them into Finns. Some even have what look like camo ponchos that I have painted white. They’re ok I suppose and I really find it hard to paint 1/72 scale after many years of 28mm castings.

I don’t know how much use they’ll be and glorious bicycle charges across frozen lakes doesn’t seem like a good idea (but no doubt someone will try it one day) but they’ll be handy somewhere or sometime.